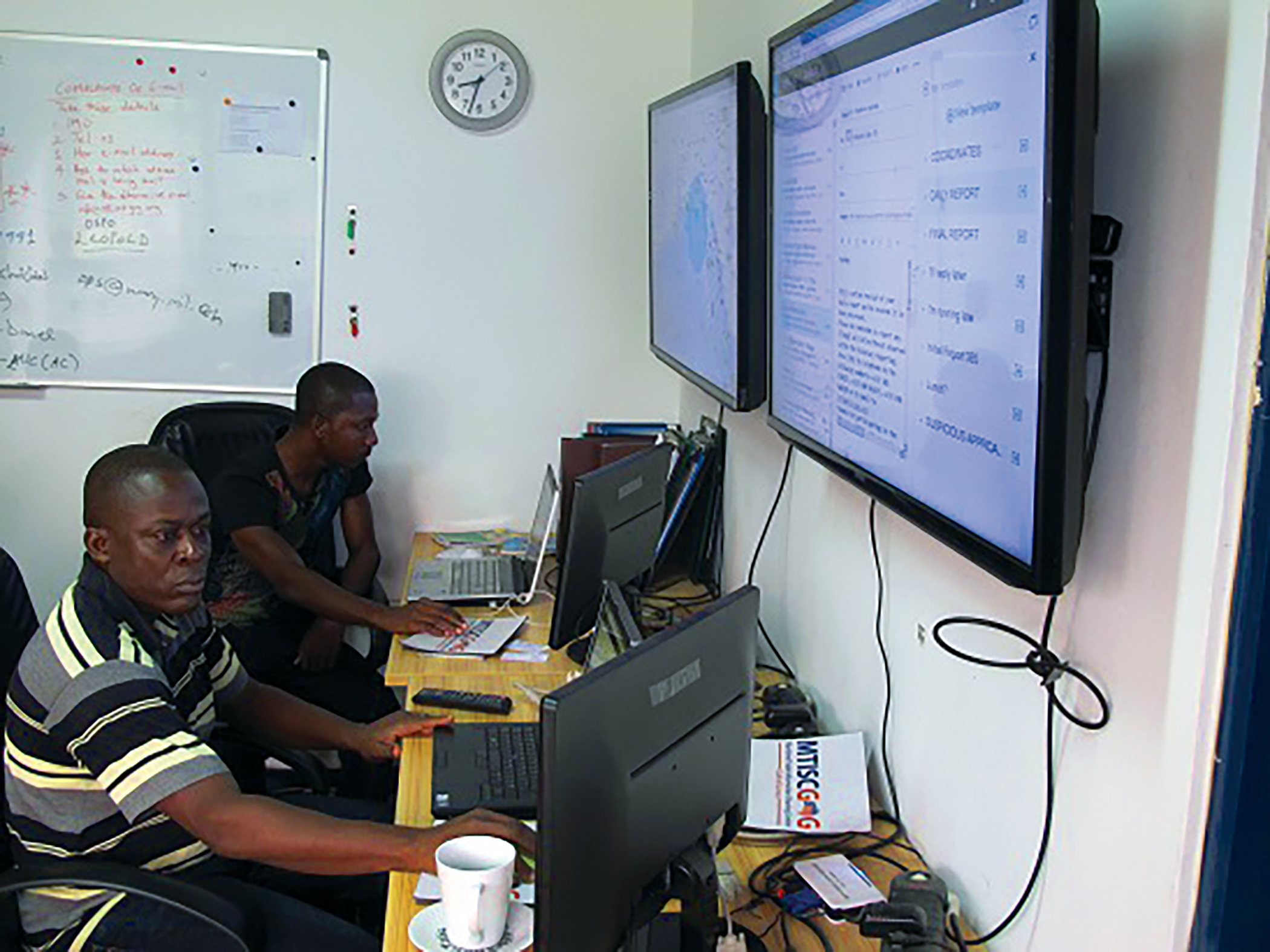 From a small, white building on the campus of Regional Maritime University near Tema, Ghana, a handful of people keep watch on a maritime area that stretches from the northern border of Mauritania to the southern border of Angola.

The Maritime Trade and Information Sharing Centre (MTISC) for the Gulf of Guinea is a free service funded by private and public interests, including the International Maritime Organization (IMO), Interpol, Oil Companies International Marine Forum and nations from the G7 Friends of the Gulf of Guinea Group. Watch keepers, who work two or three at a time, typically are drawn from regional navies and industries.

The system is simple. Vessels email an initial report when entering the voluntary reporting area (VRA). After that, vessels are expected to send daily position reports as long as they sail within the VRA. They send a final report as they leave. Ships can report suspicious activity at any time.

Dehcorti Karmo, left, a watch keeper from Liberia, and Lt. Ankrah Ahmed of the Ghana Navy keep track of data coming into the Maritime Trade and Information Sharing Centre for the Gulf of Guinea.

“We are not just receiving reports and just replying and processing — no. We get the message; we go through them thoroughly,” said Dehcorti Karmo, a watch keeper from Liberia. “When we receive this information, we get baseline information from vessels. What they see they report to us.”

Then, watch keepers share crucial information in the VRA with nearby vessels so they can avoid areas that might be dangerous. Center workers also relay information about suspected threats to regional and national authorities.

Say a merchant ship in the VRA off the coast of Nigeria sees what appears to be a suspicious ship-to-ship transfer. This could mean that criminals are offloading oil from a hijacked vessel. The merchant ship could report it to the center, which is staffed around the clock. The MTISC, in turn, would notify nearby merchant vessels and report the incident to Nigerian authorities and regional marine operations centers for further investigation. The center also participated in scenarios as part of Obangame Express 2015.

Any merchant vessel in the VRA can report to the MTISC: commercial fishing vessels, oil industry ships, barges, even yachts. Ships are not compelled to report when they enter the VRA. But if they don’t, the center will not be able to notify them of potential threats. So the advantages are clear.

The payoff for regional navies and maritime security authorities also is high. MTISC watch keepers estimate they receive 250 to 300 messages each day. That’s hundreds of opportunities for merchant ships to help keep an eye on the Gulf of Guinea.

It’s difficult to quantify how many of those emails may include reports of suspicious activity. Sometimes crews may opt to call or email the center directly, rather than fill out another form. Sometimes, national maritime centers will inform the MTISC of issues.