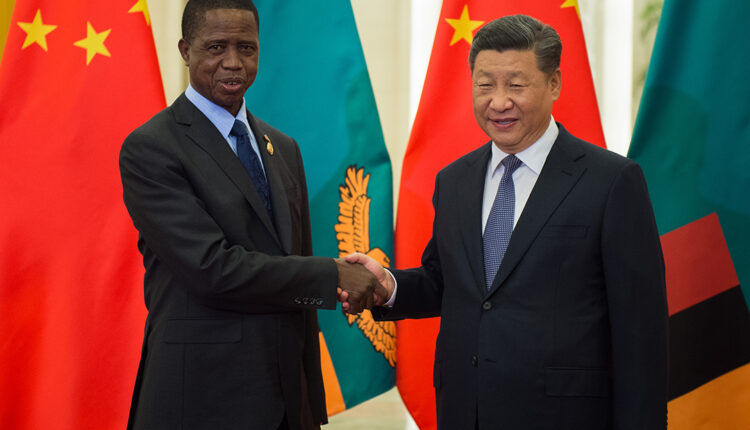 As COVID-19 cases continue to grow, African nations are reconsidering China’s involvement in the continent. They’re demanding relief from crippling debt and seeing strained ties between their citizens and the continent’s estimated 1 million Chinese expats after widespread reports about mistreatment of Africans in China in response to COVID-19.

To get a sense of what could lie ahead for Africa’s relationship with China, look no further than Zambia, which is struggling beneath the weight of Chinese debt it can never repay, according to Zambian scholar Emmanuel Matambo, part of the Southern Voices Network for Peacebuilding at the Woodrow Wilson Center in Washington, D.C.

“Most of the things that have happened in Zambia haven’t happened yet anywhere else on the continent, even in terms of disillusionment with the Chinese or disenchantment in the general population,” Matambo said in an interview with the Wilson Center in December 2019.

Zambia is home to 17.3 million people, has wealth based on copper and coal mining, and has one of Africa’s longest-running relationships with China going back to 1964, the year Zambia gained independence.

The long and contentious relationship with China means that ordinary Zambians pay very close attention to the ties between the two countries.

“The rest of African nations can learn from the Zambia-China relations the fact that China’s unqualified disbursement of debt to weak African economies could have massive implications on African democracy,” Matambo said in an interview with ADF.

In nearly 15 years of intense investment, China has poured billions of dollars into Zambia, including by creating China’s first tax-free district in Africa. The depth of China’s investment in Zambia — along with tens of thousands of Chinese nationals who live there — has given rise to a popular criticism by some Zambians that their country is a de facto Chinese colony.

“There is a perception among Zambians that our government is captive to the Chinese nation due to the loans we have acquired and cannot, therefore, enforce anything against Chinese nationals or companies,” critic Kalima Nkonde wrote in the Lusaka Times in 2018.

As of April, Zambia’s external debt was estimated at $11.2 billion, with half of that owed to China, although economists believe the actual ratio could be higher. Debt consumes half of Zambia’s tax revenue, according to The Economist. And as in other nations facing what some have called a “debt trap,” Chinese loans to Zambia are frequently tied to critical infrastructure, such as Kenneth Kaunda International Airport in Lusaka, Zambia’s capital. This makes any default on payments a threat to national sovereignty.

Like its neighbors, Zambia faces the twin problems of protecting its people from a growing COVID-19 outbreak and repaying its huge debts to China, which so far has refused to grant a blanket reprieve across the continent as the International Monetary Fund and World Bank have done.

“Zambia’s Chinese debt will always be a challenge to benchmark as a model until the transparency veil is lifted from these financing contracts. They been shrouded in secrecy,” Hambayi told ADF. “The silver lining with COVID is that it offered the country leverage to renegotiate its Chinese debt.”

Zambia’s elections in 2021 also will play a role in its future relations with China, Hambayi said.

He said the election will be “a determinant of what economic strategy the country takes in potentially recovering from the imminent recession following COVID.” In addition to that, future relations with China will depend on how much it relents in its stranglehold on financed infrastructure, he said.

“It will be an eco-political endgame at play,” Hambayi said.

The combination of economics and COVID-19 are adding even more tension to Chinese-Zambian relations. Years of conflict between Chinese business owners and Zambian workers escalated this spring with the release of viral videos showing Africans living in the Guangzhou province of China being evicted from their homes and, in some cases, forced to sleep in the streets.

As a result, Zambia’s relationship with China is likely to be a major issue next year.

“The opposition are likely to capitalize on this, and I foresee more anti-China rhetoric from them,” Zambian economic statistician Shebo Nalishebo told Quartz Africa.

The small Republican Progressive Party spells out where it stands on the issue in its party slogan: “Say No to China.”

According to The Guardian, Zambian rapper PilAlto put his opposition to China into lyrics posted to Twitter last fall: “The roads belong to China. The hotels are for the Chinese. The chicken farms are Chinese. Even the brickworks are Chinese.”

As Zambia negotiates its current path through COVID-19 and its future relationship with China, it offers an object lesson for its neighbors on the continent that already do or will soon face a similar reckoning, Hambayi said.

“The lessons for other African countries will be to what extent we can redefine future Chinese debt to meet the unique challenges faced by the continent and not accept any funds that dilute the continent’s economic sovereignty,” he said.