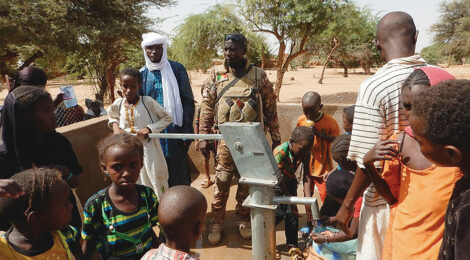 The Malian military drilled a well to provide drinking water to schoolchildren in a town badly affected by extremism. The project in Menaka, near the border with Niger, is the latest effort by the Malian government to help restore peace to northern Mali.

In October 2018, members of Mali’s civil-military team backed by Soldiers from the French Operation Barkhane inaugurated the well at the Tabangout School. The town’s mayor, local leaders, police, members of the United Nations mission and other dignitaries attended the ceremony.

When the water started flowing, the mayor tasted it and declared it to be the “purest in Menaka.” He told the crowd that it now was everyone’s responsibility to maintain the well. The team also handed out 350 kits filled with school supplies for children.

After the ceremony, Soldiers handed out T-shirts to children with the phrase “We Are the Future” printed on them.

Menaka, a desert town of about 25,000 people 1,200 kilometers northeast of Bamako, was controlled by extremists during Mali’s 2012 crisis. The militant Islamist group the Movement for Oneness and Jihad in West Africa closed schools, banned secular music and harshly punished Sharia violations. Although Menaka is now liberated, it has been the site of clashes between various armed groups and has endured recurring banditry and lawlessness.

A July 2018 U.N. report found that, due to insecurity, 650 schools were closed in the central and northern regions of Mali, affecting 200,000 children.