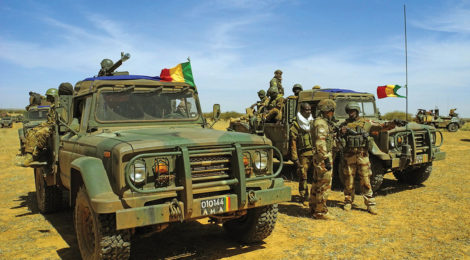 The U.S. has pledged $111 million to the G5 Sahel Force to bolster the fight against extremism in the Sahel region.

The 5,000-person regional force includes troops from member nations Burkina Faso, Chad, Mali, Mauritania and Niger. Extremist violence in the region has tripled over the past year and resulted in 895 deaths, according to an October 2018 report by the Africa Center for Strategic Studies.

“Since our initial pledge of $60 million in October 2017, U.S. assistance has nearly doubled to approximately $111 million to meet the needs and strengthen the capabilities of the G5 Sahel Joint Force,” U.S. Africa Command public affairs officer Nate Herring told The Defense Post.

“We stand by and are committed to this important African-led initiative as they work to bring peace and security to the Sahel,” he said.

Mali has been hit hardest by extremist attacks since the country was gripped by crisis in 2012, but the region is concerned by the emergence of homegrown groups in the other countries. The European Union raised $474 million from member nations and other donors in February 2018 to support G5 Sahel operations, Bloomberg News reported.