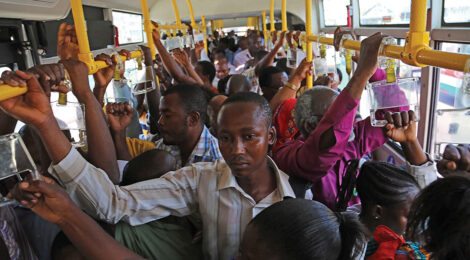 Six million people call the Tanzanian city of Dar es Salaam home, making it one of the largest cities in Africa. Its growth rate of 6.5% will see the number of residents rise to more than 10 million by 2030.

Due to this rapid growth, along with an underdeveloped road network, an increase in cars and trucks, and a historic lack of efficient public transport systems, city residents must contend with serious congestion and mobility challenges.

Some residents have complained of having two-hour commutes each day. But with the progress made under the $300 million Dar es Salaam Metropolitan Development Project, newly paved roads have eased traffic and improved commuting times. Through collaboration with local councils, the project has improved local and feeder road networks throughout the city.

The project is funded by the Nordic Development Fund and the International Development Association, the World Bank Group’s fund for the world’s poorest countries. Interventions include feeder-road construction, which have reduced traffic congestion in areas that used to be directed by traffic police during peak travel hours.

“The driving principle in the road network improvement was to facilitate direct connection to all six corridors of the bus rapid transit when they are completed,” said Eric Dickson of the World Bank.

Officials say that more than 70% of Dar es Salaam is not planned, which has been hindering government efforts to provide essential services such as water, electricity and roads, and the city’s capacity to deal with fires and floods.

Through the project, the new roads also have been equipped with high-quality drainage systems, sidewalks and street lighting, which has improved safety and quality of life in neighborhoods.

“Making these strategic investments allows people, vehicles and goods to move through the city more efficiently and comfortably, and these improvements have a real impact on the day-to-day lives of residents and businesses,” Dickson said.