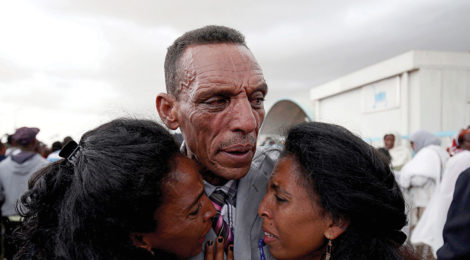 The cooling of hostilities between Eritrea and Ethiopia is more than just a momentous political event for East Africa. For many on both sides of the long-disputed border, it has been a time of joy, reunion and healing.

Eritrean Airlines began regular flights to Ethiopia’s capital, Addis Ababa, on August 4, 2018, an early step in improving relations between the two countries after a generation of hostility.

Ethiopian media confirmed that a plane carrying Eritrean transport and tourism ministers and other officials had landed at Addis Ababa Bole International Airport — the first time in two decades such a flight had taken place.

“Upon arrival at Bole, Ethiopia’s State Minister for Foreign Affairs Hirut Zemene and other senior Ethiopian officials welcomed the delegation,” according to a Fana Broadcasting Corp. report.

In July 2018, an Ethiopian Airways plane became the first commercial flight from Ethiopia to land at Asmara, Eritrea’s capital, in 20 years.

The thaw in relations has been a boon to family members separated by the border. Addisalem Hadgu, 58, joyously embraced his two daughters, Asmera and Danayt, after seeing them for the first time in 18 years when the Ethiopian Airlines flight arrived at Asmara International Airport.

“It was years of darkness. The separation and longing was unthinkable. Imagine someone who just won a lottery. That is how I feel now,” Addisalem told the United Kingdom’s Independent. “This was unnecessary. I lost my family because of it. We all fought in it one way or another.”

Ethiopian Prime Minister Abiy Ahmed offered in June 2018 to make peace with Eritrea two decades after the start of a conflict in which an estimated 80,000 people died.

When the two nations went to war in 1998, both sides deported each other’s nationals. Families like Addisalem’s were divided. In 2000, his wife and two daughters disappeared, the Independent reported. A letter left by his wife indicated that she may have been caught up in a wave of nationalism, common among people on both sides of the conflict.

Since signing an agreement in Asmara on July 9, 2018, to restore ties, the Eritrean and Ethiopian leaders have moved swiftly to sweep away hostility. Abiy and Eritrean President Isaias Afwerki already have visited each other’s country.

← The Threat at Home
‘Sharpening Our Arrowhead’ →