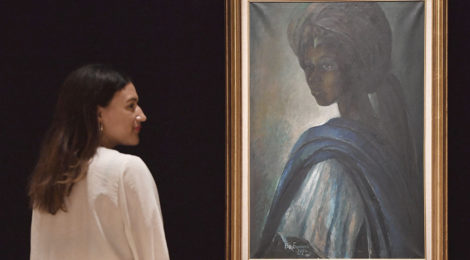 The“Nigerian Mona Lisa,” a painting lost for more than 40 years and found in a London apartment in 2018, has been exhibited in Nigeria for the first time since it disappeared.

Tutu, a painting by Nigeria’s best-known modern artist, Ben Enwonwu, was painted in 1974. It appeared at an art show in Lagos the next year, but its whereabouts after that were unknown, until it resurfaced in north London.

The owners, who wished to remain anonymous, had called in an expert in modern and contemporary African art to identify their painting. He recognized Enwonwu’s portrait.

The owners put the portrait up for sale, and it was auctioned for $1.57 million to an anonymous buyer. The sale made it the highest-valued work of Nigerian modern art sold at auction.

It was loaned to the Art X Lagos fair for display in Nigeria.

Tutu is referred to as the “Nigerian Mona Lisa” by virtue of its disappearance and re-emergence, and it is the first work of a modern Nigerian artist to sell for more than $1 million. The original Mona Lisa, Leonardo da Vinci’s painting, was stolen from the Louvre in 1911. The thief, Vincenzo Peruggia, eventually took it to Italy, where it was recovered and in 1914 returned to the Louvre.

The Nigerian painting is a portrait of Adetutu Ademiluyi, a granddaughter of a traditional ruler from the Yoruba ethnic group. It holds special significance in Nigeria as a symbol of national reconciliation after the 1967-70 Biafran War.

Enwonwu belonged to the Igbo ethnic group, the largest in the southeastern region of Nigeria, which had tried to secede under the name of Biafra. The Yoruba, whose homeland is in the southwest, were mostly on the opposing side in the war.

Enwonwu painted three versions of the portrait. Prints first made in the 1970s have been in circulation ever since, and the images are familiar to many Nigerians. Enwonwu died in 1994.