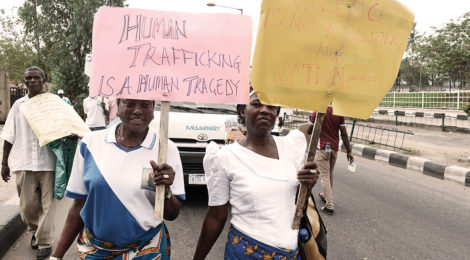 By rewarding whistleblowers, boosting prosecutions and challenging beliefs in black magic, Nigeria is ramping up its crusade against human trafficking. The effort is backed by millions of pounds of British aid, anti-slavery and government officials said.

Thousands of Nigerian women and girls are lured to Europe each year and make the treacherous sea crossing from Libya to Italy, where they are trafficked into sex work, the United Nations reported. The number of Nigerian women and girls arriving in Italy by boat surged to more than 11,000 in 2016 from 1,500 in 2014, with at least four in five forced into prostitution, according to the International Organization for Migration.

To tackle this rise, Nigeria’s National Agency for the Prohibition of Trafficking in Persons (NAPTIP) is stepping up efforts to catch traffickers and support victims, backed by a $9.8 million aid package announced by Britain’s foreign aid department.

“We have embarked on more aggressive campaigns to create awareness,” said NAPTIP Director Julie Okah-Donli. “We are covering all the schools and rural areas because this is where they get the girls from.”

The agency also is rewarding whistleblowers with a share of traffickers’ gains.

“Since the policy was adopted in October, we have had more than 50 people coming to us with information,” Okah-Donli said. Britain’s latest pledge for Nigeria comes after a promise in September 2017 to double its spending on global projects tackling slavery and trafficking to $211 million.

The government of Edo State, one of the main points of origin for trafficked women, and NAPTIP are also working to educate people so they are not fearful of black magic. Victims of trafficking fear that witchcraft rituals performed by spiritual priests could harm or kill them or their relatives if they disobey their traffickers.