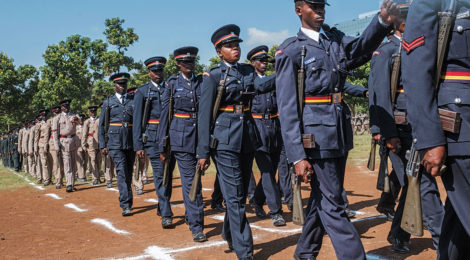 The new structure will merge the Administration Police, a paramilitary security force, with the Kenya Police to form a General Duty Police force, the newspaper The Standard reported. The deputy inspector general of police will command the force of 64,252 officers. There will be a new ceremonial uniform, renamed training institutions and new rules on housing allowances. In a September 2018 announcement, Kenyatta said the reforms began immediately and would continue for three years.

The reforms aim to make the police force leaner, more responsive and more respected in the eyes of civilians.

“We usher in a transformative model of policing that promotes professionalism,” Kenyatta said. “With the changes, we expect our officers to approach duty with bravery, honesty and commitment.” The Administrative Police, which includes a rapid-deployment unit and a border security unit, will  guard the country’s strategic installations, protect public officials and dignitaries, and secure the border, The Standard said.

“This administrative move effectively inspires confidence to wananchi [ordinary citizens], investors and entrepreneurs to build a strong economy, which create wealth and jobs,” he said.