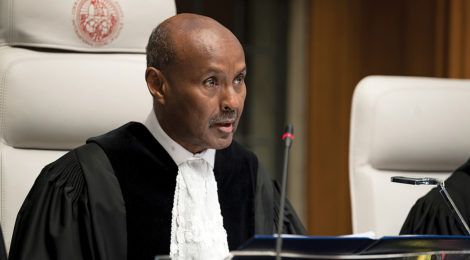 Judge Abdulqawi Ahmed Yusuf has become the first Somali to lead the International Court of Justice in The Hague, Netherlands.

“I am humbled by this election,” he said. “And I feel that it actually shows the trust placed in me by my colleagues. That’s why I’m extremely grateful to them. I hope that I will be able to meet their expectations and to perform the responsibilities entrusted to me in the best way possible — to show them that they have actually made the right choice in electing me as their president.”

The 15-member court is the primary judicial organ of the United Nations. It issues final and binding rulings on disputes between states and advises the U.N.

Yusuf’s leadership is being tested immediately. Among his first cases is a dispute between the U.S. and Iran over the freezing of Iranian assets inside the U.S.

“We have 14 cases which are pending, and which, of course, concern all types of disputes between states,” he said. These include disputes about environmental protection, boundaries and diplomatic immunity. “We have been extremely busy for the past 10 years as a court, which shows the increase in the growing trust that the international community has in the World Court, in our court. And we are extremely happy with that development.”

Another case that will be closely watched in East Africa is a maritime boundary dispute between Somalia and Kenya. Yusuf said his nationality will not influence his work on the case.

Yusuf has been on the court since 2009 and had previously served as the court’s vice president. He will serve a three-year term.