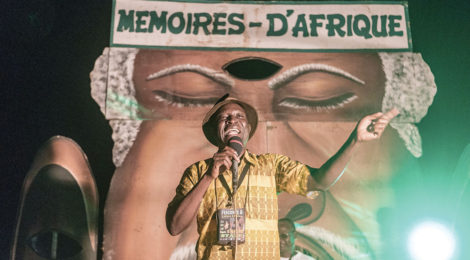 Dusk settled on Sainte-Cecile square, and the oil lanterns cast a soft yellow light as a storyteller captivated the audience with a tale about a naughty little girl who disobeys her parents and whistles at night — a way of summoning evil spirits.

Fierce beasts attack her, but her neighbor, a hunter, courageously intervenes and saves her from death.

Melissa Djimadja, a high-school student, was among those who were spellbound by the centuries-old story. “I was always told never to whistle at night but never understood why,” she said. “Now I know.”

Benin’s rich cultural history includes a seam of folk tales, many of them handed down from generation to generation by traveling storytellers known as “griots.”

Each year, a festival is held in Cotonou, the capital, to honor the proud tradition. For two nights in August 2018, more than 30 communities held the “Night of Tales” event organized by a Franco-Beninese association, Mémoires d’Afrique (Memories of Africa). It’s a 20-year-old tradition.

Chris-Mael Tonoukouin, a private-school teacher in Cotonou, came to the square to relive his childhood memories. “In the good old days, we sat on the floor around a kerosene lamp,” he said. “We were listening to our grandparents tell these funny stories between humans and animals.”

The oral tradition is being lost, said Raoul Atchaka, a representative of Memories of Africa. “We must act so that the African wisdom is not forgotten in the tombs of the old people who die.”

The point of the festival, whose tales are recounted in French and a local language, Fongbe, is to get younger people to hear them, “and then teach their children,” he said.