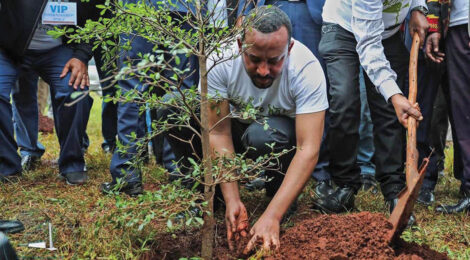 In a 12-hour stretch, Ethiopians fanned out across the country and planted 353 million trees. The reforestation campaign known as “Green Legacy” is an initiative led by Prime Minister Abiy Ahmed.

The country believes it set a world record with the plantings on July 29, 2019. In 2017, India established the record by planting 66 million trees in 12 hours, CNN reported. And though Ethiopians believe they surpassed that record, they say they aren’t done yet. During the country’s rainy season, which lasts from May to October, volunteers hoped to plant a total of 4 billion trees.

Many schools and government offices were closed for the day, and Abiy urged Ethiopians to “go out and make your mark.” Abiy participated in the event by planting a tree in the southern city of Arba Minch.

Less than 4% of Ethiopian land is forested, according to Farm Africa. Forests were much more prevalent at the turn of the 20th century when about 30% of the country was covered by trees.

Ethiopia is one of more than 20 African countries that signed a pledge in 2017 to restore more than 100 million hectares of forest as part of the African Forest Landscape Restoration Initiative.