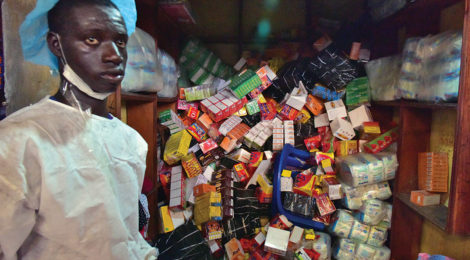 Côte d’Ivoire authorities have seized nearly 400 metric tons of fake medicine over two years. The country is battling the scourge of counterfeit drugs, particularly in Abidjan, which has become a West African haven for the crime.

Counterfeit medicine results in 100,000 deaths annually in Africa, according to the World Health Organization.

“In the course of the last two years, 385 [metric] tons of fake medicines — representing a financial loss of 152 million euros [$173 million] for the pharmaceutical industry — were seized,” said Able Ekissi, a Health Ministry inspector.

“In Ivory Coast, 30 to 40 percent of medicines are bought off the streets,” said Abderrahmane Chakibi of the French pharmaceutical company Sanofi. “They are reputed to be cheaper, and at best they are ineffective and at worst toxic, causing death.”

The illicit sector earns tens of billions of dollars a year, the World Economic Forum estimates. The Switzerland-based forum said that figure has nearly tripled in five years.

The WHO estimates that one out of 10 medicines in the world is fake, but the figure can be as high as seven out of 10 in certain countries.

The American Society of Tropical Medicine and Hygiene estimated in 2015 that 122,000 children under 5 died due to taking poor-quality anti-malarials in Sub-Saharan Africa. Anti-malarials and antibiotics are the two most in-demand medicines and are the most likely to be out of date or counterfeit.