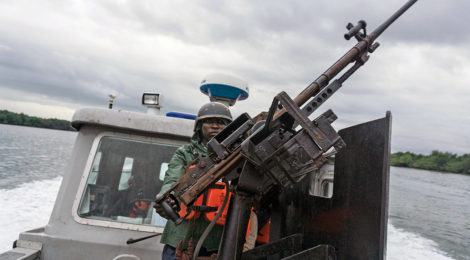 Cameroon and Nigeria are touting a naval partnership that lets them clamp down on piracy, trafficking and illegal fishing. The latest success story occurred in May 2017 when the Cameroonian naval vessel Le Ntem was traveling through Nigerian territorial waters and encountered a suspicious fishing vessel.

Capt. Fabrice Ntieuche of the Cameroon Navy said the vessel disobeyed instructions to stop until authorities threatened to use force. He said all the occupants aboard the fishing boat were arrested. Ntieuche said ships on patrol don’t hesitate to threaten force, including firing warning shots, since the area around Calabar once was notorious for piracy.

The bilateral partnership dates to 2014. Each country allows the other’s navy to pursue vessels in its territorial waters. The two navies also have established a shared communication system and provide each other backup during operations.

The Gulf of Guinea remains a global hot spot for piracy, with reported attacks concentrated off the coast of Nigeria. Regional naval coordination has been a challenge, as the gulf touches 17 countries along West and Central Africa.

Rear Adm. James Oluwole of Nigeria’s eastern naval command in Calabar said the two countries have cut piracy attacks in the area dramatically. “We have seen better collaboration,” Oluwole said. “We have on both sides been able to check the acts of piracy and made some arrests, even all the way from Angola down to the end of Senegal. Before, it was not that easy to collaborate. But once all these countries come together, we have come a long way.”

The Nigerian Navy official said the waters alongside Cameroon and Nigeria saw 53 piracy-related incidents in 2013 and 2014. In the first five months of 2017, there were no incidents in the area between the Cameroonian border and Nigeria’s Calabar.

The two navies say they routinely deal with illegal fishing and cases of kidnappings for ransom around Calabar and along Cameroon’s Bakassi Peninsula. They also deal with drug trafficking cases and ecological threats.