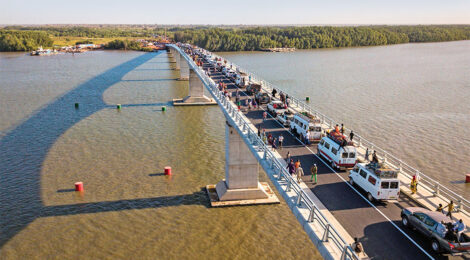 Senegal’s southern Casamance region has long been isolated from the more populous north by a geographic peculiarity: The Gambia, and the namesake river that runs most of its length.

In January 2019, the presidents of both nations celebrated the opening of a bridge that spans the river, linking both banks of The Gambia and the two regions of Senegal. The Trans-Gambia Corridor bridge ends years of isolation and difficult travel for people in the two nations along both sides of the river.

“Given the geography of The Gambia and Senegal with a river dividing both countries in two halves, I wonder why it took so much time to have this bridge,” Gambian President Adama Barrow told Agence France-Presse during the inauguration.

“We can be proud of having turned this dream of several generations into a reality,” Senegalese President Macky Sall said.

The span, also known as the Senegambia bridge, has been under study since 1972, according to The Gambia’s National Roads Authority. Construction began in 2015. It is part of a larger project, the Cairo-Dakar-Lagos Corridor, which doesn’t just connect the two countries. It also helps link other Economic Community of West African States nations between Dakar and Lagos, Nigeria.

The concrete bridge is in Gambian territory and is nearly 2 kilometers long. It crosses the river about 10 kilometers from the Farafenni border post, where Barrow and Sall met for the inauguration.

The bridge is much more than just a regional convenience. It helps link the isolated Casamance region to the rest of Senegal by avoiding a 400-kilometer route. It also will improve regional commerce. Goods and services should flow more freely across the region. Before the bridge, vehicles had to cross the river by ferry.

Sometimes people would line up and have to wait a week to board a ferry, Reuters reported.

After the inauguration, people crowded the bridge to cross it, standing shoulder to shoulder as they walked. “I’m happy about this bridge,” traveler Amadou Bah, 42, told Reuters. “Vehicles just come and pass without any delay.”

Trucks were scheduled to start crossing in July 2019. “A few months ago, I spent 10 days [at the ferry terminal] before it was my time to cross,” Senegalese truck driver Mawdo Saine told Reuters. “That’s a lot of difficulty for us drivers because what you should do in one week, you end up doing in one month.”

← Fighting Ebola Face to Face
‘They Should be Climbing the Ladder’ →