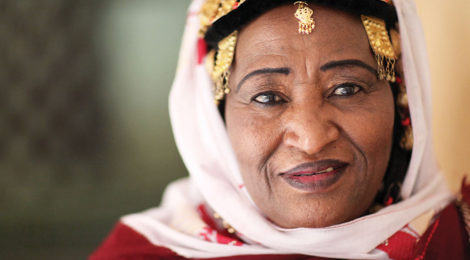 Malian singer and composer Khaira Arby, known as “the diva of Timbuktu,” died at a hospital in the capital, Bamako, in August 2018. She was 59.

Arby was one of the first women to break onto Mali’s music scene in the 1970s, according to news site MaliWeb. Her father did not approve of her singing and made sure she was married when she was 16. She had children and later divorced her husband, saying she left him because she wanted a singing career.

A native of the northern city of Timbuktu, she was notable for performing in multiple languages — Arabic, Bambara, French, Fula, Songhay and Tamasheq. She addressed social issues such as female genital mutilation through song. She was a voice for Malian unity and peace. She toured internationally, but her singing was stifled in 2012 in her homeland when Islamic militants took over the northern part of the country and banned singing in some areas.

Malians were thrilled when Arby performed at the Timbuktu Renaissance festival in 2018.

“Our religion has never banned music,” the singer told the French newspaper Libération in 2016. “The Prophet was greeted with songs when he arrived in Mecca. Cutting music off from us, it’s like keeping us from breathing. But we continue fighting, and it’s going to go on, God willing.”