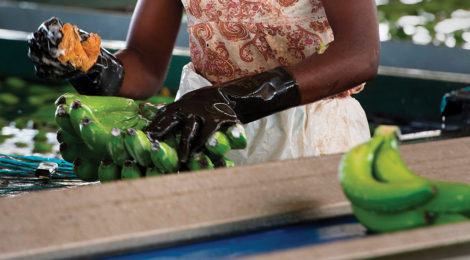 Boxes of green bananas are shifted one by one from a stack of crates into a refrigerated shipping container in Caxito, Angola.

Stamped “From Angola, with Love,” the fruit is shipped to consumers 6,000 kilometers away and is part of Luanda’s drive to diversify its economy and wean itself from oil dependence.

“We have two grades: domestic and export,” said supervisor Edwin Andres Luis Campos. “Domestic will be sold here in Angolan supermarkets in about four or five days. Export will be shipped to Europe in refrigerated containers that will arrive in Europe in between 20 and 25 days.”

Novagrolider’s output has grown exponentially in recent years, and its parent company, Grupolider, which also has interests in transport and property, employs 3,500 people.

It grows mangoes, pineapples, watermelons and bananas on its four Angolan fruit farms.

“We’re financially encouraging small-scale farmers to increase the size of the areas they cultivate,” said Eliseo Mateos. “Until now they’ve mostly used their production for subsistence, but now we want them to grow more so they can sell their crops at market. Bananas are our ‘green fuel’ — here we have one possible way of diversifying the economy.”

In the decade after the bloody 27-year civil war that ended in 2002, Angola enjoyed strong double-digit growth fueled by oil, which accounts for 90 percent of Angola’s exports and 70 percent of government revenues.

Slumping crude prices in 2014 shook the nation’s economic model, locking it into contraction. By producing more at home, the country would need to use less foreign currency to import food.

“With government support and organization, the agricultural sector could be the driving force of this country’s development,” Macedo said.

← A Web of Threats, A World of Potential
Africa Eyes Mobile Gaming Boom →