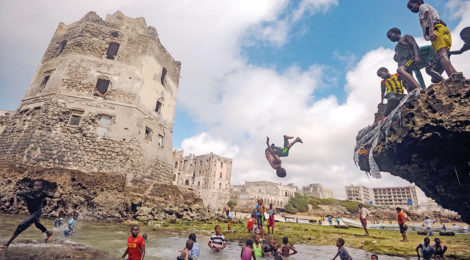 An Oasis of Fun in Somalia

Lawlessness and terror have plagued Somalia for years. Although an African Union peacekeeping force has improved matters in the East African nation, violence is still a threat.

In late October 2017, militants attacked the Hotel Naso Hablod in the Hamarweyne district of Mogadishu, killing 29 people during a 12-hour siege. At least 12 of those killed were police officers.

Earlier that month, children in T-shirts and shorts played in the water near the ruins of a building in the same district, underscoring the dichotomy of life in Somalia: Children play. Adults buy goods in city markets.

Somalis have refused to let violence defeat them or define them.

“With a place like Somalia, defined by stereotypes beyond its borders, it has become acceptable to think of the country as holding only war and extremism, and to forget that the lives there are multilayered, possessing similar and universal concerns, interests, and desires,” wrote Alexis Okeowo in an October 17, 2017, piece for The New Yorker magazine just a few days after a truck bomb killed at least 300 people in Mogadishu.

Yes, life in Somalia still is fraught with potential danger and destruction at the hands of al-Shabaab. But life finds a way to continue in the joyous yells and laughter of children splashing in the water.