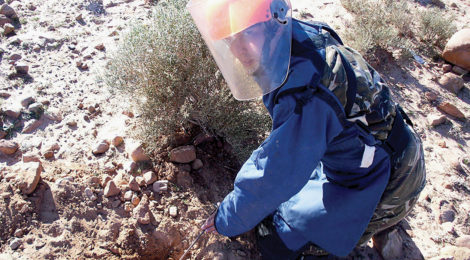 Algeria announced that it has destroyed the last of its stock of anti-personnel mines, 10 months after fully demining the entire country.

A total of 5,970 mines were destroyed at a ceremony in Djelfa in southeast Algeria.

Algeria ratified the Ottawa Convention banning anti-personnel mines in 2000 and said it completed the demining of its territory in December 2016, clearing 9 million land mines.

The scourge claimed 7,300 civilian lives in the North African country, mostly during the 1954-1962 war of independence, according to Deputy Defense Minister Ahmed Gaid Salah.

Algerian demining specialists cleared mines from 1963 to 1988 and restarted the land mine clearance program in 2004 to finish the job.

“Over 120 million square meters of land were cleared and released for normal use,” said Col. Ahcène Gherabi, director of Algeria’s National Demining Programme. “Thanks to humanitarian demining activities carried out entirely with Algeria’s own resources, Algerians can once again feel safe when moving in such areas and using their land.”