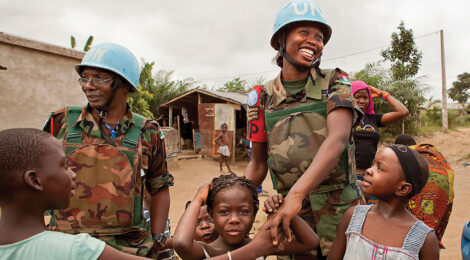 Côte d’Ivoire and Liberia share more than a border. The two West African nations have a recent history of civil war and upheaval. Both also had United Nations peacekeeping missions to help them pick up the pieces after the conflicts.

The United Nations Mission in Liberia (UNMIL) began September 19, 2003, immediately after the second Liberian civil war, which started in 1999. The first civil war raged from 1989 to 1996. UNMIL’s job was to support the cease-fire agreement; protect U.N. staff members, civilians and infrastructure; protect humanitarian workers; and help train national police officers and restructure the military. The mandate was a tall order for a nation beset for so long by violence and instability.

Conditions were similar in Liberia’s neighbor to the east. The United Nations Operation in Côte d’Ivoire (UNOCI) began February 27, 2004. Its primary concern was to help warring parties implement the peace agreement they had signed in January 2003.

Each mission encountered major problems along the way. In Côte d’Ivoire, violence broke out after the November 2010 national election when President Alassane Ouattara defeated incumbent Laurent Gbagbo, who refused to relinquish power. Gbagbo spent five months in 2011 using troops and mercenaries to resist the transition. Authorities eventually arrested him, and Ouattara was inaugurated May 21, 2011.

UNMIL’s big challenge came less than three years later when Ebola reared its head in West Africa, bringing terror and death to Liberia, Guinea and Sierra Leone. The first regional outbreak of the deadly disease sickened 28,600 people and killed 11,325. Liberia was hardest hit, logging nearly 11,000 cases and 4,810 deaths, according to the U.S. Centers for Disease Control and Prevention.

These factors ensured that both missions would be difficult, but they ended — first in Côte d’Ivoire on June 30, 2017, then in Liberia on March 30, 2018 — after logging significant successes. Much can be learned from both. 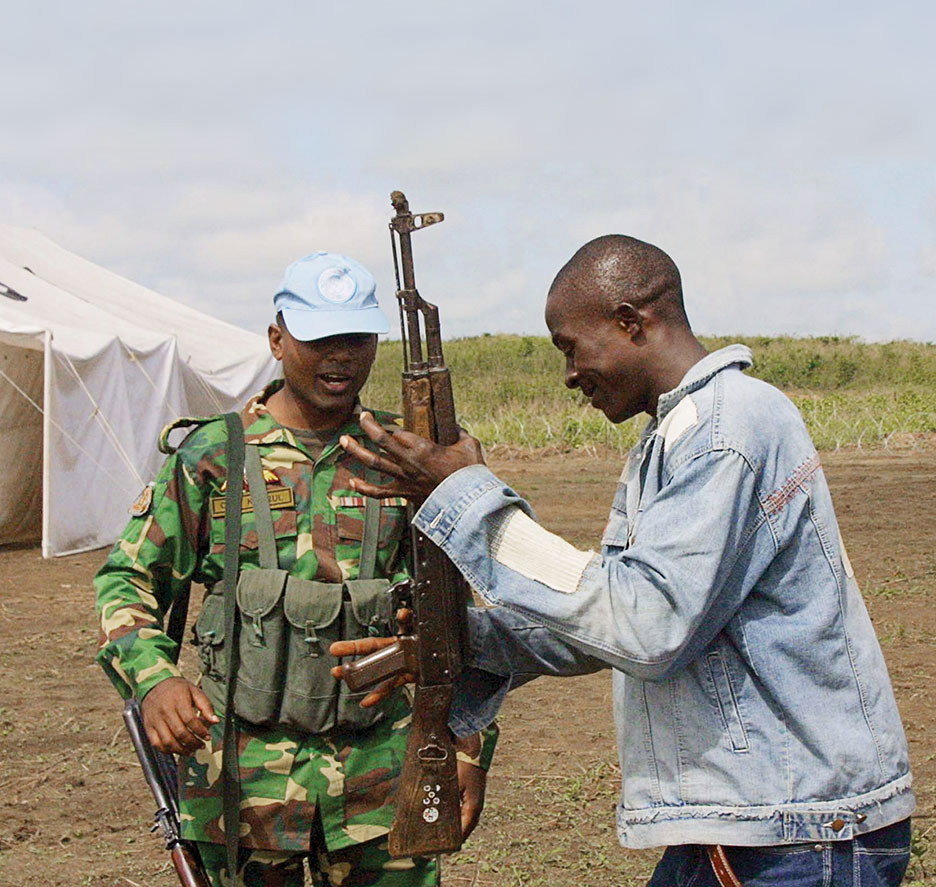 A former Liberian rebel surrenders his weapon to a UNMIL peacekeeper during a disarmament campaign. THE ASSOCIATED PRESS

Back in 2002, Ivoirian Soldiers tried to overthrow then-President Gbagbo, who had taken office two years earlier. The coup failed, but a rebellion followed, with rebels taking the name Forces Nouvelles, or New Forces. They controlled Côte d’Ivoire’s North, splitting the country. The government controlled the South, and the clashes grew into a civil war.

“From September 2002 to January 2003, the civil war was marked by confrontations between government forces and rebels, the capturing of towns followed by massacres of civilians, aerial helicopter attacks in the west, targeted kidnappings and assassinations, and large-scale sexual violence,” Alexandra Novosseloff wrote for the International Peace Institute (IPI). Liberian and Sierra Leonean mercenaries fighting on both sides gave the conflict a regional dynamic.

France intervened with Operation Licorne on behalf of thousands of its citizens living in the country, and the Economic Community of West African States (ECOWAS) also stepped in militarily. In February 2004, the U.N. created UNOCI, and ECOWAS rehatted its forces under the peacekeeping mission.

Gbagbo stubbornly held onto power up to and through the presidential election of 2010, which he lost to Ouattara. As both men started to form their own administrations in Abidjan, conflict again erupted, leading to 3,000 deaths with half a million people either internally displaced or forced out of the country before Gbagbo was arrested on April 11, 2011, Novosseloff wrote.

During this post-election crisis, Gbagbo’s loyalists attacked civilians in the capital, as well as UNOCI patrols and headquarters. UNOCI worked alongside Licorne forces to end the violence. Two U.N. helicopters joined French attack choppers to target Gbagbo munitions storage positions. In April 2011, Ivoirian forces caught Gbagbo and his wife, who were flown to The Hague to face prosecution. He was the first former head of state taken into custody by the International Criminal Court. Both were eventually acquitted.

As the UNOCI mission began to draw down in
2013, its mandate was extended into 2017 because it had to maintain the ability to support a series of elections in 2015 and 2016. 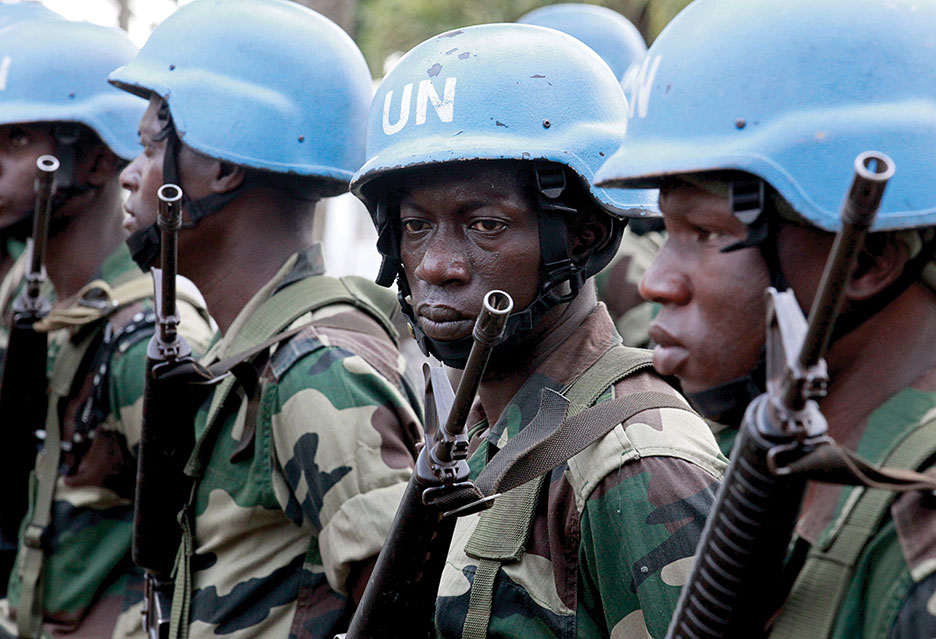 Upheaval in Côte d’Ivoire and Liberia — and the two nations’ proximity — made mission cooperation virtually inevitable. The shared border was a focus of cooperation in the latter stages of the UNOCI mission. Both efforts supported national governments in addressing border security, and both bolstered information sharing between their respective civilian and military components, according to a 2013 report to the U.N. Security Council by then-Secretary-General Ban Ki-moon. The work produced “a positive impact on operations and analysis,” he wrote.

In fact, starting in 2005 as the United Nations Mission in Sierra Leone (UNAMSIL) was ending nearby, then-Secretary-General Kofi Annan asked the Security Council to allow inter-mission cooperation in Côte d’Ivoire, Liberia and Sierra Leone. The move was a significant innovation at the time for such missions, according to the U.N. After UNAMSIL peacekeepers left, a small UNMIL contingent moved to Freetown, Sierra Leone, to provide security to the court prosecuting crimes committed during that country’s civil war. This arrangement lasted until 2012.

UNOCI and UNMIL focused on security and border control, strengthening state authority and sustainable return and reintegration for those who had been displaced. UNMIL troops conducted land and air patrols across the borders of Côte d’Ivoire, Guinea and Sierra Leone. The patrols, called Operations Mayo, Seskin and Loko, respectively, served as a template for continued joint operations by the militaries for the three countries, according to a 2007 article on the website ReliefWeb.

UNOCI and UNMIL also reached out to refugees and communities in western Côte d’Ivoire and eastern Liberia through radio station broadcasts.

UNMIL radio in particular was one of the mission’s most valuable assets, according to a paper for IPI by policy analysts Daniel Forti and Lesley Connolly. At its height, UNMIL radio broadcast 24 hours a day in multiple languages and reached about three-quarters of the country and 80 percent of the population. It was so successful that after the mission, ECOWAS later took control of it to continue broadcasts. This type of media outreach would prove vital to UNMIL’s most challenging threat: Ebola.

Liberia, like its neighbor Côte d’Ivoire, faced nearly intractable challenges after years of civil war. In 2003, the UNMIL mission had 15,000 peacekeepers, more than 1,100 police officers and nearly 2,000 civilian staff members, making it the largest peacekeeping mission at the time. UNMIL was charged with reestablishing the rule of law and ensuring free and fair elections. But UNMIL’s leaders, and indeed the world, could not have predicted the next test.

In early 2014, Ebola struck Liberia just as UNMIL was preparing its withdrawal. With one of the lowest concentrations of doctors in the world — about 1.4 physicians per 100,000, or about 50 for the nation of 4.8 million people — Liberia quickly fell into disaster. But the presence and involvement of UNMIL made a difference as the region and world responded.

“The U.N. and other partners recognized quite early on that this was more than a public health crisis,” Karin Landgren, undersecretary-general, said in 2015, according to The Story of UNMIL.

Health services collapsed, and commodity prices grew, she said, leading to security concerns. The government declared a state of emergency and called out the army. 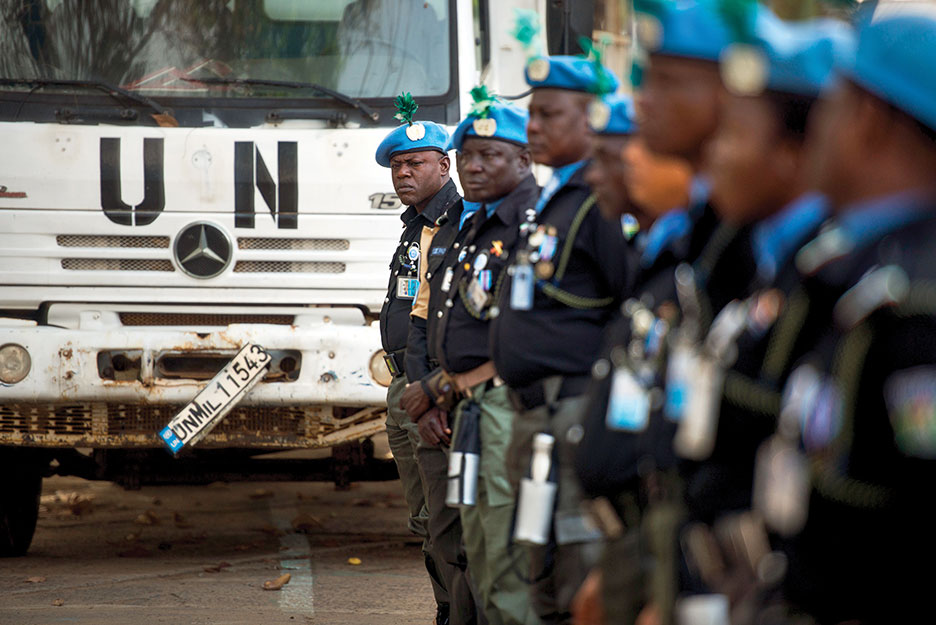 A Nigerian Formed Police Unit leaves as the United Nations Mission in Liberia comes to an end in March 2018. UNITED NATIONS

“I’m convinced that the continued presence of UNMIL was reassuring to the population, and the fact that we had offices all over the country actually contributed to convening the actors who needed to come together,” Landgren said.UNMIL’s support for the Ebola response, especially through the U.N. Mission for Ebola Emergency Response (UNMEER), could be considered a model.

“Although UNMEER was the official Ebola mission, the UNMIL structure enabled what UNMEER needed,” David Penklis, director mission support, said in The Story of UNMIL. “If UNMIL didn’t deliver, UNMEER could not have delivered.”

The peacekeeping mission was forced to adjust to meet the demands of the crisis, including abandoning a troop downsizing exercise. Logistics was a key area. UNMIL transported cargo that came into the country by air and stored it in contracted warehouses.

UNMIL’s communications efforts, particularly through its radio broadcasts, also made a difference. The mission started media outreach through radio, theater and visual media to raise awareness about the virus and its prevention among a skeptical public. Mission radio broadcasters devoted most of their airtime to public education about Ebola and prevention, including news bulletins, safety information and call-in shows through which listeners could talk to health-care workers, traditional leaders and others.

With the increase in education came an uptick in prevention and early treatment, which reduced the risk of the disease spreading.

Conditions are not perfect in Côte d’Ivoire or Liberia today, but the two peacekeeping missions have left the countries poised to capitalize on their potential and success. Côte d’Ivoire is a West African economic powerhouse, posting economic growth of 7.6 percent in 2017, according to the World Bank.

In Liberia, Dee Maxwell Saah Kemayah Sr., the nation’s permanent representative to the U.N., wrote for United Nations Peacekeeping that UNMIL supported his country in every sector, from disarmament to judicial reform to elections. “The withdrawal of UNMIL signifies that Liberia is strongly positioned on the path of lasting stability, democracy and prosperity.”

← A Dangerous Environment
Training for Peace →