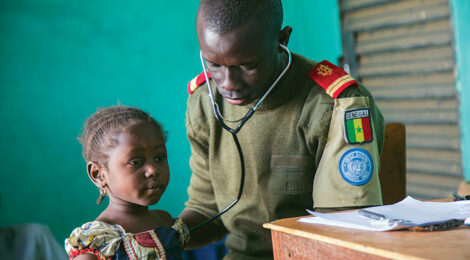 History shows that wars are not always won with just bombs and bullets. To defeat an enemy and preserve the peace, Soldiers must win the hearts and minds of civilians.

This is particularly important in peacekeeping operations where foreign forces can be viewed with suspicion and fear.

To overcome this challenge, militaries must invest time and energy in civil-military engagement projects. These can be as complex as building a new bridge or as simple as organizing a football match. No matter the scale, these projects help the local population see Soldiers in a different light.

For these efforts to be successful, it is important for the military to reflect the population it serves. Defense forces across the continent are pushing to increase the number of women serving in uniform. The United Nations has set a goal of increasing female uniformed personnel in peacekeeping missions from 5% to 15%.

Other efforts emphasize nontraditional peacekeeping skills. Peacekeepers are learning about mediation and conflict management as a way to deescalate tensions in war-torn countries. They are taking the time to learn about the culture and history of the countries in which they serve.

Militaries also are answering the call to respond to natural disasters and pandemics. The South African National Defence Force (SANDF) has played a leading role in rescuing people from floods in Southern Africa and delivering food and medical aid. In a span of just six days after Tropical Cyclone Idai hit Mozambique in May 2019, SANDF rescued 417 people and airlifted 30 to medical facilities.

By putting people at the center of the mission, Soldiers can gain the trust of allies and build a foundation for a lasting peace. Respect is earned when Soldiers live up to the highest standards of professional ethics and responsibility. The defense forces that understand this duty are in the best position to succeed.

← ‘A Source of Enduring Pride’