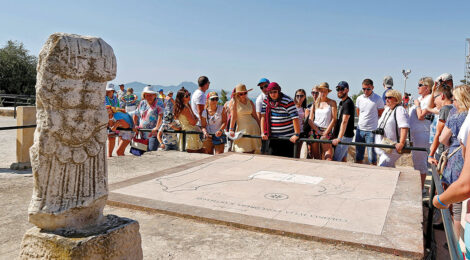 Tunisia is making a push to protect its endangered archaeological sites and rich cultural heritage.

These sites often are looted or damaged during illegal nighttime excavations by people looking for goods to sell on the black market. The issue was brought to the forefront in 2011, when Tunisia’s ousted dictator Zine El Abidine Ben Ali was found to have been hoarding a range of archaeological artifacts.

Today, Tunisia’s National Heritage Institute (INP) is increasing its efforts to protect the country’s history. The organization has recovered more than 25,000 archaeological items since the 2011 revolution.

Objects of significant historical and cultural value often end up on the European market and in the homes of Tunisia’s rich and powerful. In 2017, Tunisian authorities seized a rare 15th-century Torah scroll that they believed was being smuggled to Europe. In March 2019, customs agents seized 600 antique coins dating from the 2nd century from a car in the coastal town of Sfax.

Today, the INP gets more than double the number of reports for theft in the historically important region of Kasserine than it did before the revolution, said Mohamed Ben Nejma, head of the region for the institute. He added that the instability and chaos of conflict often provide a window for archaeological looting.

But he also attributed the increase in recovered objects to the fact that authorities are getting more serious about tackling the illicit antiquities trade.

“It might have been partly to do with state interests,” said Yasser Jrad, head of the seized objects department at the INP. “Especially, since we discovered pieces stolen from our [national] sites in the houses of Ben Ali and his family.”

Matthew Hobson of the United Kingdom-based Endangered Archaeology in the Middle East and North Africa project, said multiple factors need to be taken into account when it comes to protecting heritage sites from theft, which often is driven by poverty and political instability.

“There are economic reasons” for looting, he said. “The blame should not be put on the people who are trying to get by day to day, but the persons who are furnishing these collections.”