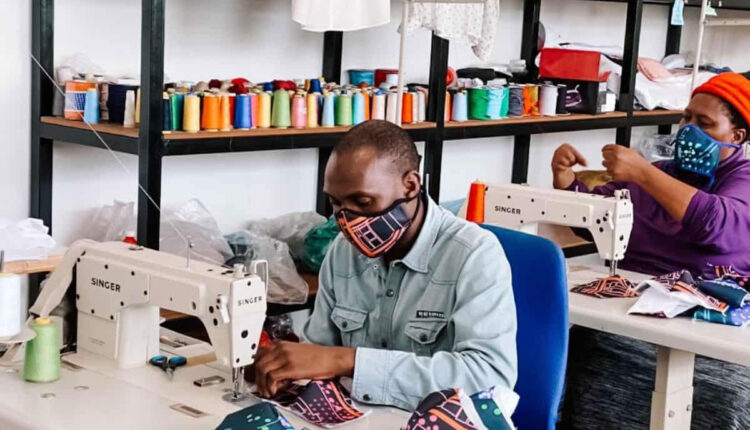 When South Africa began relaxing its COVID-19 restrictions on June 1, an estimated 8 million people returned to work, raising the specter of even greater spread of the novel coronavirus in Africa’s hardest-hit country.

To stem that tide, Health Minister Zweli Mkhize called for everyone in the country to wear face coverings in public. The government also requires all companies to provide each worker with two face masks. The result: a large demand for protective equipment.

In response, companies are ramping up production of masks, face shields and other forms of personal protective equipment, or PPE.

In announcing the loosened restrictions, Minister of Trade and Industry Ebrahim Patel applauded the resourcefulness of South Africans as he reported the government expected industries to be producing 31 million protective masks per month by the end of June.

“That’s a million masks every day, Monday to Sunday, that will be running off the production line,” Patel said at the May 29 gathering to announce the new COVID-19 strategy. At the time of his announcement, officials reported nearly 30,000 COVID-19 infections and rising, with the majority being in the Western Cape province.

As the economy reopens, some see the potential for trouble. N95 masks are required for workers in the nation’s mining sector, Ben Smith, co-owner of N95 maker Greenline Respiratory Masks, told thisisafrica.net. An N95 mask meets high standards for air filtration, meaning that it filters at least 95% of airborne particles. Such masks are not intended for indefinite use.

Reopening mines will put a strain on N95 supplies available for health workers, Smith said. In response, Greenline has increased its production to 1.2 million masks per month.

Patel said the nationwide lockdown that started in late March allowed the government and industry to retool and begin building up supplies of crucial protective equipment.

Legae Larona, a sewing cooperative based in Alexandra, a township of Johannesburg in Gauteng province, is leading the way in locally produced PPE. It expects to produce 20,000 masks in partnership with Siemens Southern and Eastern Africa.

“Working alongside the South African government to not only assist in taking care of our most vulnerable communities, but to ultimately contribute to the fight against this virus and the betterment of the country is imperative in these trying times,” said Sabine Dall’Omo, Siemens CEO for Southern and Eastern Africa.

Other companies are playing a part in the nationwide effort to produce more PPE. Ford Motor Co. of South Africa began producing face shields at its Silverton Assembly Plant in Pretoria in April for medical workers. Ultimately, Ford and its nationwide partners planned to produce 500,000 shields.

Until the outbreak of COVID-19, South Africa sold about $3.5 million in medical-grade N95 masks, largely to the European Union. In early 2020, the volume of masks nearly doubled from 580,000 boxes in 2019 to 950,000 boxes, the vast majority shipped to China and the Middle East, according to News 24 television.

At the end of March, Patel froze those exports along with other key protective equipment such as hand sanitizer, and South Africa began importing PPE instead.

The push to develop locally made PPE represents a shift away from the country’s strategy of importing it from abroad in those early days of the pandemic. Under the new plan, South Africa has returned to exporting PPE — primarily to its neighbors on the continent.

“We have already started supplying and exporting PPE to neighbors and the rest of the continent,” economist Xhanti Payi told The Citizen. “It’s important that we do so because, as neighbors, it’s only when we can ensure the infection doesn’t spread across the whole region that South Africans are safe.”