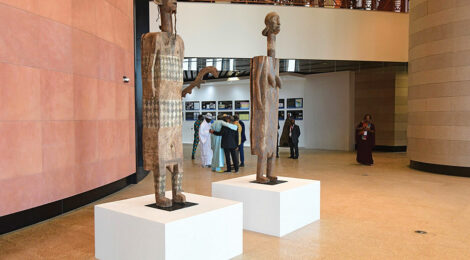 Senegal has opened its new $34 million Museum of Black Civilizations in the capital, Dakar. It follows calls from Senegal and other African nations for France to return art it looted during the colonial era.

Among the first temporary exhibitions to be shown are works from artists from Mali and Burkina Faso as well as from Cuba and Haiti.

The idea of establishing the museum dates back more than 50 years, to Senegal’s late poet-president, Léopold Sédar Senghor. Along with Martinican writer Aimé Césaire, Senghor was a creative force behind the philosophy of Négritude, which promoted black culture, heritage and identity.

The museum will be a creative laboratory to help shape a continent’s sense of identity. The museum’s directors hope they will “be able to turn Senegal into an intellectual and cultural capital of the black world.”

“This museum is a step forward for us,” Amadou Moustapha Dieng, a Senegalese arts journalist, told the BBC. “I know there are important relics which I’m not able to see unless I go abroad, but now with this space, we can get back the relics and Africans can come here now and see this was their history.”

The Museum of Black Civilizations has changed the landscape of downtown Dakar.

The circular architecture was inspired by traditional homes typical to southern Senegal. The site has nearly 3,700 square meters of exhibition space.

In late 2018, a report commissioned by French President Emmanuel Macron recommended that African treasures taken without permission be returned to their countries of origin.

Senegalese Culture Minister Abdou Latif Coulibaly told the BBC he welcomed the French report because “every piece from Senegal is in France.”

The African state with the most art pieces in France is Chad, another former colony.