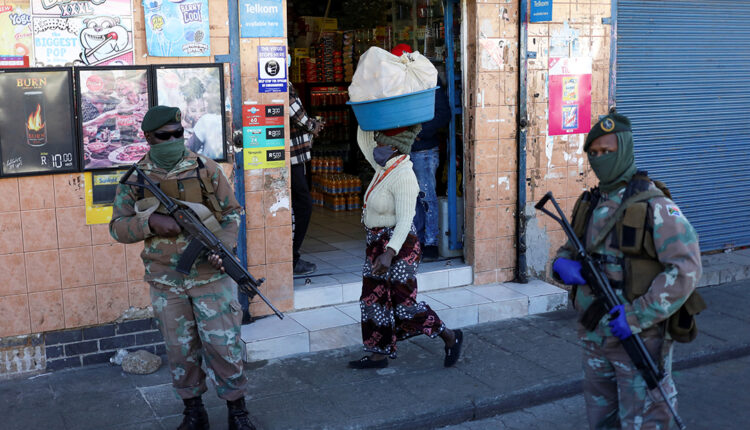 Two months after the unprecedented deployment of tens of thousands of South African National Defence Force (SANDF) troops to help prevent the spread of COVID-19, officials are saying they made a difference.

When announcing the deployment, President Cyril Ramaphosa told troops their mission was to save lives. “We are not the only country waging war against an invisible enemy — coronavirus,” Ramaphosa said. “In you, our people have a defense mechanism.”

The government initially deployed more than 2,800 SANDF troops after the first virus case was confirmed in March. COVID-19 has sickened more than 101,500 South Africans and killed more than 1,900, as of June 22.

With a population of nearly 55 million, South Africa’s infection rates are lower than many other countries around the globe, but officials say they are not relenting.

SANDF’s full deployment included 8,200 Air Force, 34,000 Army, 5,200 Military Health, and 5,700 Navy personnel, as well as 20,000 reservists and a few hundred auxiliary troops, although not all of them were deployable during the lockdown. The additional deployment, scheduled to last until June 26, had a budget of more than $264 million.

The deployment included tense moments such as allegations of excessive force and unjustified killings. In response, the SANDF set up hotlines and encouraged citizens to report any instances of abuse.

“We have learnt that we will have to improve ourselves in dealing with our people because we don’t know the future wars, how they will look like and to deal with the people,” SANDF Chaplain General Monwabisi Jamangile told broadcaster SABC. “It’s the most difficult thing as a Soldier, but we will improve on that one.”

Among SANDF’s tasks was to procure medical equipment to treat patients at sites run by Military Health Services, and its leaders were to determine how the additional equipment and facilities could be used to improve the health system.

To assist with early detection of COVID-19 cases, SANDF units in all provinces were accompanied by health care workers who performed thermal scans during vehicle checks and at roadblocks, defenceWeb reported.

At virus hot spots in Kwa-Zulu Natal, Western Cape, Gauteng and Limpopo, SANDF troops staffed mass quarantine sites in military facilities, while decontamination teams were in Pretoria to perform industrial-scale work. That was needed in June, when Pretoria Magistrate’s Court was closed after a clerk tested positive for COVID-19.

Troops also made inspection and oversight visits to Hoedspruit Air Force Base, next to Kruger National Park, where military volunteers were training, and at the Army Infantry School in Oudtshoorn, Navy fleet headquarters in Simon’s Town and the Military Academy at Saldanha.

In Pretoria, Bloemfontein and Cape Town, troops helped prepare isolation and quarantine wards at military hospitals, while field hospitals and mobile mortuary units were set up across the nation.