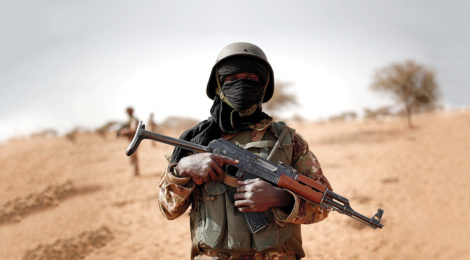 Five countries in the Sahel are setting up a security bloc to crack down on trafficking, terror and other cross-border crimes. The force assembled by the G5 Sahel bloc — Burkina Faso, Chad, Mali, Mauritania and Niger — is expected to comprise about 5,000 troops. “We bring this combat against terrorism not only to protect our own people and countries but for the whole world,” Niger’s President Mahamadou Issoufou said at a news conference in the capital, Niamey.

The idea of the G5 force was conceived in 2015 and was expected to be operational by the end of 2017. In October, the U.S. pledged to contribute $60 million to support the G5 effort.

Islamist groups, some with links to al-Qaida, seized Mali’s northern desert in 2012. French and African forces scattered them the next year, but they still carry out attacks on
peacekeepers, Soldiers and civilians.

Issoufou said a multinational force in the Lake Chad region, including Soldiers from Benin, Cameroon, Chad, Niger and Nigeria, had some success against Boko Haram militants, but that this was largely financed by Africa’s biggest economy, Nigeria. No country in the G5 had sufficient resources.

“It is important that the international community takes note of this and gets together to give us resources to ensure our mission can be accomplished,” he said.

“For terrorism knows no border,” Issoufou said. “It will go to Europe, it will go to the United States. The world has to be mobilized.”

Analysts see the G5 force as the basis of an eventual exit strategy for about 4,000 French troops deployed to the region on counterinsurgency missions, mostly in Mali.

Issoufou said the force would be divided into three deployments across the Sahel region: an eastern one consisting of Chadian and Nigerien forces; a central one with forces from Niger, Mali and Burkina Faso; and a Western one with troops from Mali and Mauritania.