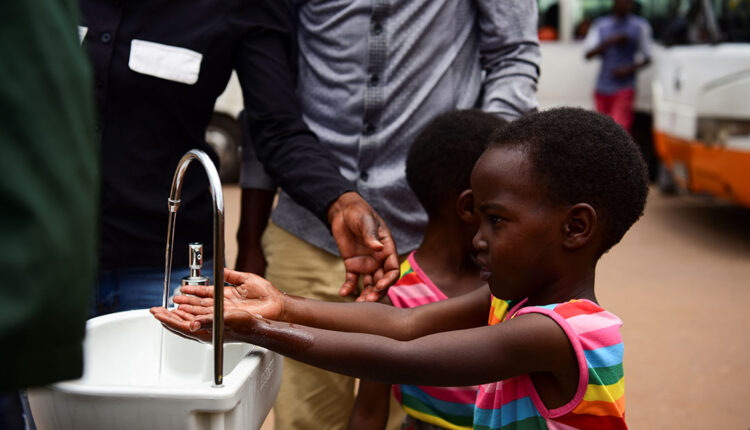 After taking early and aggressive actions to halt the spread of the coronavirus, Rwanda is guarding against a second wave of cases. In support of the country’s efforts, the U.S. government has pledged $4 million to improve testing and training of front-line workers.

Of the donation, $3 million will be used by the Rwanda Biomedical Centre to increase laboratory diagnostic capacity and biosafety, enhance central and district-level surveillance, prevent infection, and treat acute respiratory infections.

The financial influx came before the biomedical center was put to full use in mid-June, when it performed 3,495 COVID-19 tests in one day due to a spike of cases in Rusizi. Of those tested, 41 were positive for the disease.

“Most of the new cases are household members of previously confirmed Covid-19 positive (people) in Rusizi,” Sabin Nsanzimana, the center’s director told The New Times.

The $3 million portion also will help train front-line public health workers in Rwanda through a field epidemiology training program, according to the U.S. Embassy in Kigali.

Another $700,000 will strengthen surveillance and case management in support of Rwanda’s COVID-19 National Preparedness and Response Plan. Almost $500,000 will support refugees in Rwanda. Recent estimates show that Rwanda is host to about 150,000 refugees, mostly from Burundi and the Democratic Republic of Congo. Rwanda maintains six refugee camps and four transit-reception centers and works to integrate refugees into urban areas.

COVID-19, the disease caused by the coronavirus, has sickened more than 500 Rwandans and killed two.

“We discussed our good relationship and the support he personally, and his administration, are extending to Rwanda to combat the #COVID19 pandemic. This was much appreciated,” Kagame wrote on his Twitter account.

Over the past 20 years, the U.S. has invested more than $1.5 billion toward public health in Rwanda, which has helped the nation battle malaria, tuberculosis and HIV, among other health threats.

Peter Vrooman, U.S. ambassador to Rwanda, said the U.S. is “proud of the strong partnership that we have with Rwanda in public health.”

“U.S. public health assistance keeps everyone safer and is making a real difference in Rwandans’ fight against COVID-19,” Vrooman said.

To contain the spread of COVID-19 in Rwanda, which has Africa’s highest population density, officials implemented a full lockdown a week after the first COVID-19 case was confirmed in mid-March. They established a contact-tracing system a week later and began testing all staff policing borders, as well as those working in public spaces.

Plans to reopen the nation’s economy and allow travel between provinces recently were stymied by a slight uptick in confirmed COVID-19 cases.

Daniel Ngamije, Rwanda’s health minister, said on public radio that “reopening the economy, public transport and commercial motorcyclists at this particular moment would render all our success useless and enable coronavirus to spread across the country.”

To stimulate business and save jobs, Rwanda’s government recently established the COVID-19 Economic Recovery Fund. At just over $106 million, the fund is expected to boost domestic production of essential items such as masks, gloves, sanitizers, disinfectants and other necessary products. The Central Bank will disburse the money to commercial banks and microfinance institutions and credit unions, which will lend to eligible businesses.

“The Economic Recovery Fund, in addition to other recovery measures, will help to overcome the significant hardship brought on by COVID-19 on businesses and individuals and allow them to be in a position to play a meaningful role in our economic recovery,” Finance Minister Uzziel Ndagijiman said.