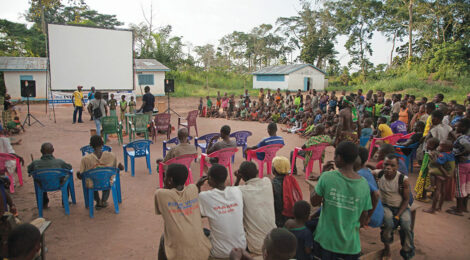 A giant screen flickers to life in a remote village in the equatorial forest of the Central African Republic. About 200 villagers take in an evening of films, thanks to a traveling cinema team that aims to entertain and enlighten.

Ambulant Digital Cinema reaches out to people in parts of a country scarred by violence.

“Some people are astounded when they see a car, so imagine what it’s like when we’re projecting films,” said Serge Mbilika, a state television journalist who started the program in April 2018.

Before the show, Mbilika spends afternoons strolling around the streets of the hosting villages with his compact camera, filming villagers as they go about their business. It gets people’s attention and spreads the word about the evening’s event.

During the show, which comes after an hour of music and dancing, viewers laugh to see themselves on the large screen.

The prime aim of the roving cinema is to raise awareness of issues such as proper hand-washing methods, the need for vaccinations and the ethics of forced marriages. One short film emphasizes the need for girls to have an education.

Mbilika also is convinced that cinema can help people live together with respect after violence between armed groups erupted into civil war in 2012.

UNICEF and the Alliance Francaise provide the money required for traveling the country and to show some of the films. The bulk of the equipment comes from Cinema Numerique Ambulant-Afrique, which supports mobile teams in nine West and Central African countries.