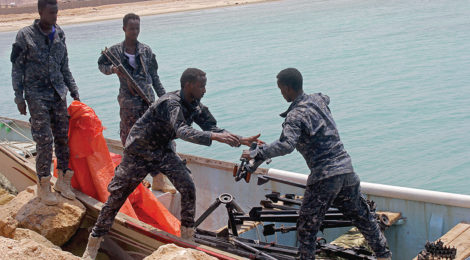 Maritime police from Somalia’s semiautonomous region of Puntland seized a boat loaded with weapons from Yemen.

Puntland authorities displayed dozens of anti-aircraft guns, machine guns, AK-47 rifles and boxes of ammunition from the boat apprehended off the Horn of Africa.

He said they had seized other boatloads of weapons destined for Islamic State and al-Shabaab militants active in Somalia. However, on this occasion the cargo was believed to be owned by arms smugglers who would have sold it at local retail outlets.

“Today, we suspect traders own these weapons, but we shall investigate further,” he said.

Puntland has been hit by heavy fighting as al-Shabaab and a splinter group linked to ISIS attacked government troops around the Galagala hills, 30 kilometers southeast of the regional capital, Bosaso.

In June 2017, al-Shabaab overran a military base in the town of Af Urur in the hills area, killing 38 people, mainly Soldiers.

Unlike the rest of Somalia, Puntland rarely suffered militant attacks before the 2017 surge in violence, mainly because its security forces are regularly paid and receive substantial U.S. assistance.