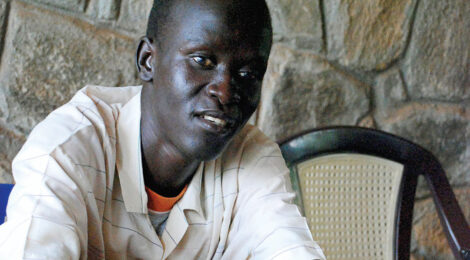 A blind student reads a Braille version of the Bible in Juba, South Sudan. AFP/GETTY IMAGES

A U.S.-based nonprofit is helping hundreds of blind South Sudanese see again by hiring a local doctor to perform surgeries on patients in the Jonglei State capital, Bor.

Sixty-year-old Mary Ayak Thie lost her vision about three years ago. Ayak said it returned after the doctor removed cataracts from her eyes.

“Before the operation, everything was dark and I could not see, but now it is better,” she said. “I can see my food; I can go to the bathroom by myself. So I thank the doctor who has helped me see again.”

Dr. Santino Malang was hired by Partners in Compassionate Care to perform the operations in Bor.

“We have screened over 6,000 patients,” Malang said, “and we have done over 172 cataracts as we speak. I feel good because somebody was blind and can see after the operation and is able to walk again alone by themselves.“

Unfortunately, Malang said, not all patients can have their sight restored.

“People with glaucoma, people with corneal scarring, we are not able to restore their sight,” he said. “So what happens? We just tell them we can’t do it, and we counsel them. So it is hard for them and we feel bad, but there is nothing more we can do.”

Each surgery costs about $100, far cheaper than just about anywhere else in the world for the same operation. Partners will spend about $50,000 to perform operations in Bor but will extend the surgeries to other areas of Jonglei if the nonprofit receives more donations, said Deng Ajak Jongkuch, executive director of the organization.

“The need for cataract surgeries is huge,” Jongkuch said, adding that a local surgeon could perform the surgery if given proper support.