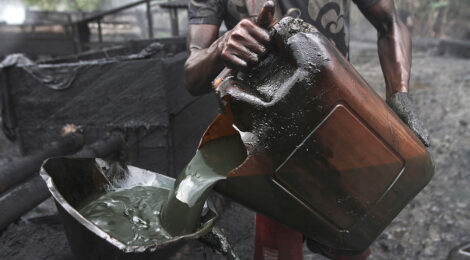 From algorithms to track “dark” ships smuggling stolen crude oil to an online licensing system to undercut corruption, Nigeria’s Department of Petroleum Resources (DPR) hopes it can use new technology to tackle theft that has cost the country billions.

In the oil-rich Niger Delta region, thieves tap pipelines and siphon crude into barrels aboard small craft. They then sail alongside larger vessels, allowing the contraband to be pumped into oil tankers bound for export, usually to Asia — mixing up to 10% stolen crude with legitimate product.

Africa’s top oil exporter has turned to French data company Kpler to help ferret out smugglers from the thousands of ships plying Nigerian waters. The DPR began working with Kpler in December 2018 and unveiled the collaboration in April 2019. Kpler and the DPR declined to specify the value of their contract.

From Kpler’s shared office space in London, the head of its partnership with Nigeria, Antoine Pillet, zooms in on a lonely vessel deep in the Delta’s river system using satellite data and the company’s own software.

Sitting above the Forcados crude pipeline and away from a main shipping channel, the ship is surrounded by swamps stained black by spills and forests hollowed out by wildcat construction — tell-tale signs of theft and refining.

“In some ways, we’re the [closed-circuit TV] of what’s going on in Nigerian waters,” Pillet said. “We provide the data, but don’t really give opinions on what may be going on.”

Kpler’s platform monitors 24/7 and watches unusual journeys like this and changes to ships’ drafts that indicate on- or off-loading of cargoes. It logs data into an algorithm it is training the DPR to interpret.

The United Nations Security Council estimates that Nigeria lost $2.8 billion in revenue to oil theft in 2017, although Kpler says the minimum 100,000 barrels per day — $3 billion to $8 billion a year — identified in a 2013 Chatham House report better approximates current losses.

The DPR also is rolling out other plans to record oil and gas flows into a real-time central database.

← An Architecture of Trust
‘To Satisfy our Customers’ →