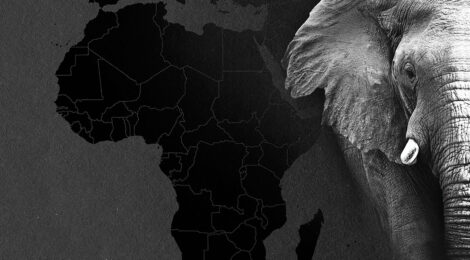 Botswana’s commitment to its diverse and majestic wildlife is evident the moment visitors walk into Sir Seretse Khama International Airport in Gaborone.

The centerpiece of the airport’s main entrance is a 2.5-ton life-size sculpture of an African elephant made entirely of ivory tusks. The tusks came from animals that died naturally.

During the sculpture’s 2015 dedication, then-President Ian Khama said the elephant “will serve as a reminder to all who pass through this building that one live elephant is worth so much more than all the pieces of art made from ivory gathering dust in homes far removed from the African plains,” according to National Geographic.

The Southern African nation is home to a third of the continent’s elephants with about 130,000. In recent years, Botswana has been a continental leader in protecting elephants and other animals from poachers. This commitment and affection is evident everywhere. Prints and paintings of indigenous wildlife — from cheetahs to antelope to elephants — grace hotel walls and the lobby of the Gaborone International Convention Centre. Animals here are not merely a novelty. They are a part of the national identity and a crucial cog in the nation’s prospering economy. 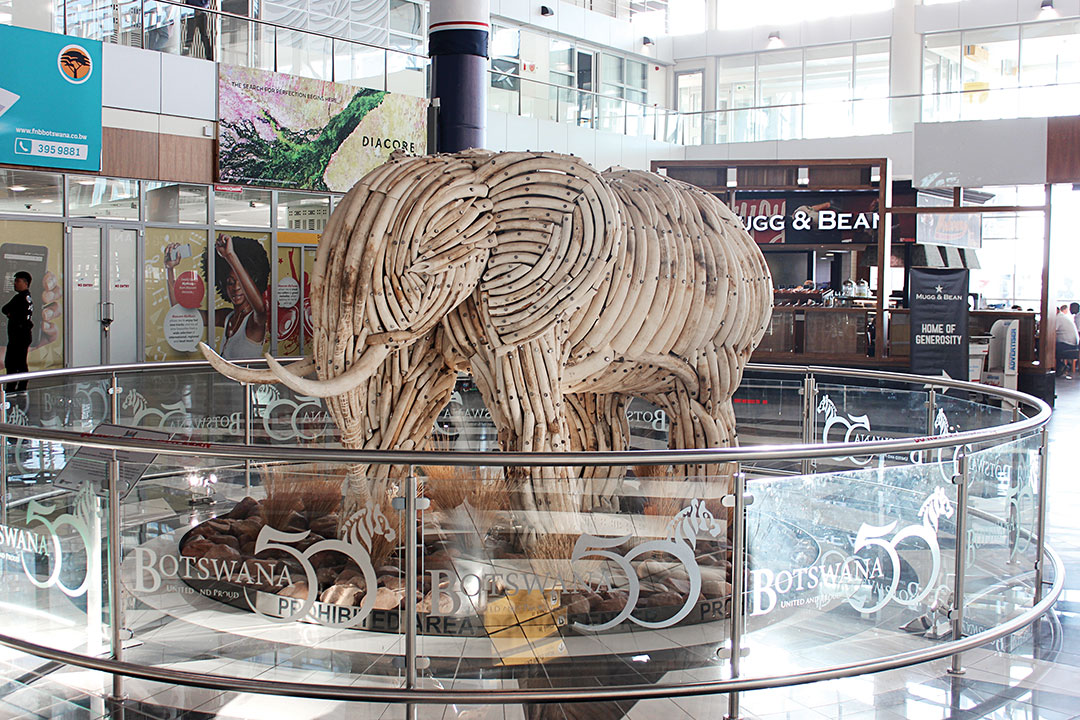 This sculpture, made from the tusks of elephants that died naturally, stands in Sir Seretse Khama International Airport in Gaborone, Botswana. Unveiled in 2015, the sculpture is meant to raise awareness of the plight of African elephants. ADF STAFF

Tourism, driven largely by wildlife sightseeing safaris, is second only to Botswana’s extensive diamond industry in terms of economic vitality. Botswana took in $705 million in tourism revenue in 2017, up from $580 million the year before. The country has taken in half a billion dollars or more from tourism every year from 2004 through 2017, according to CEIC Data.

Through diamonds and tourism, Botswana has transformed itself from one of the world’s poorest nations at independence in 1966 to a country that enjoys per capita income of more than $18,000, the fifth-highest on the continent, according to worldatlas.com.

The vitality of Botswana’s lucrative tourism industry underscores the necessity of a robust national anti-poaching response. And the response is one that must keep pace with the ever-evolving tactics of poachers bent on harvesting animal parts that fetch millions of dollars on the global market each year.

Botswana’s top anti-poaching official has said the nation sees about 80 elephants poached a year, according to various sources. Any amount is considered excessive by Dr. Unity Dow, Botswana’s minister of international affairs and cooperation. “One elephant dead is one elephant too many,” she said at a 2018 news conference, according to the Institute for Security Studies.

Poaching produces ever-increasing levels of illicit profit at each stage of the handling and smuggling process. A National Geographic report said middlemen on the ground make anywhere from $66 to $397 per pound for ivory from elephant tusks. At consolidation hubs, which often are set up along national borders, the value rises to $220 to $496. From there, ivory travels to export centers, which tend to be along coastlines or in or near capital cities. At that point, values increase to $606 to $882.

As ivory reaches Asian markets — a common destination — the value jumps to $946 to $4,630. What were formerly tusks on some of Africa’s most majestic animals become jewelry, sculptures and knickknacks. 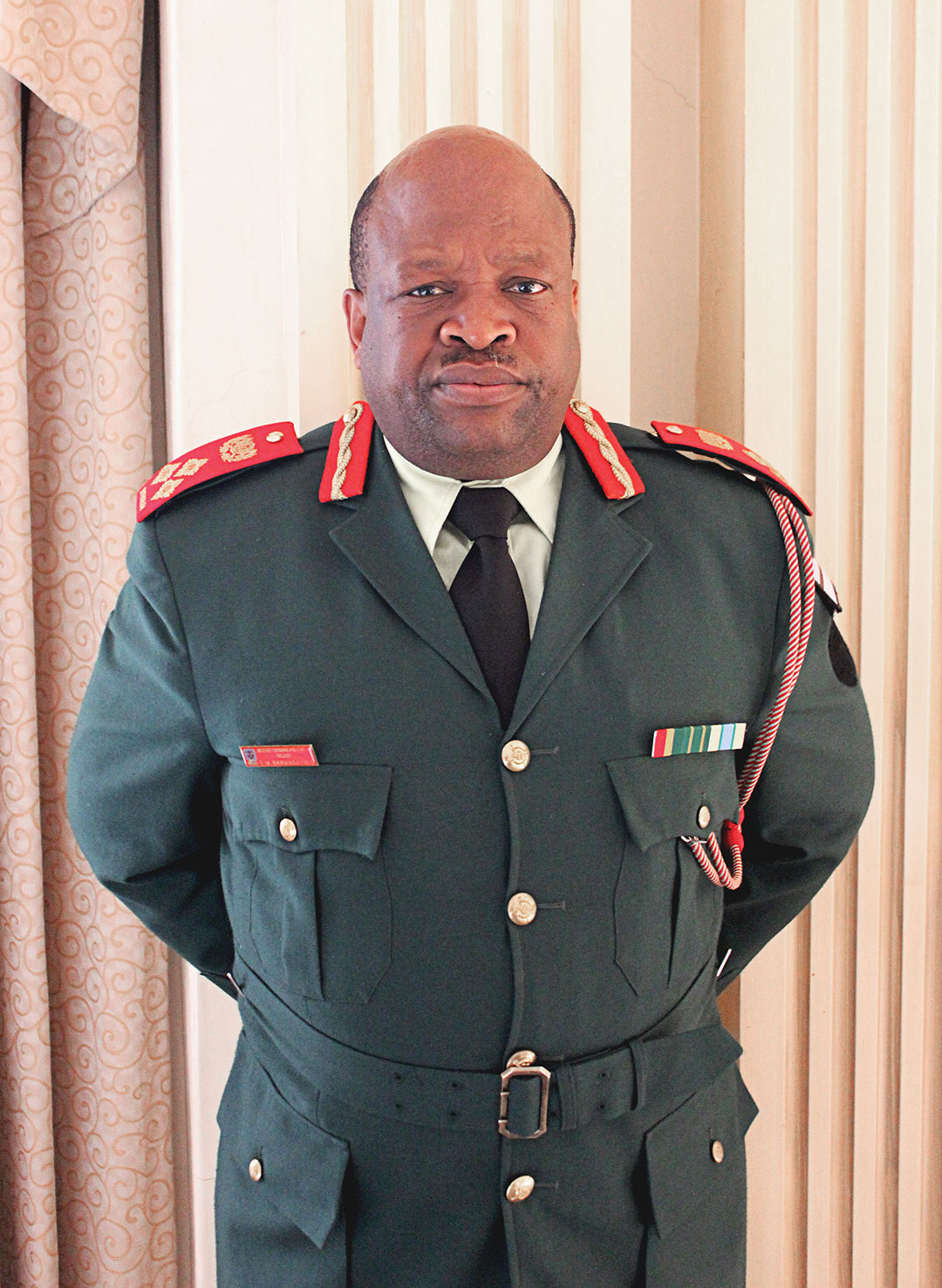 Similarly extravagant values are given to rhino horns, which are ground to powder and sold as health or medicinal substances, despite their having no such qualities. The same goes for pangolin scales, which are used in the most preposterous of ways. According to the journal Nature, dried pangolin scales are “roasted, ashed, cooked in oil, butter, vinegar, boys’ urine, or roasted with earth or oyster-shells,” in the false hope of curing a variety of ills. “Amongst these are excessive nervousness and hysterical crying in children, women possessed by devils and ogres, malarial fever and deafness.”

Poachers also target other animals in Botswana. In addition to elephants, pangolins and the nation’s small population of rhinos, these bandits also kill big cats such as lions, cheetahs and leopards.

Botswana fights the ever-present poaching threat using a multidimensional effort that enlists government resources at every level. This approach is necessary to address the increasing sophistication of poachers and the criminal networks that sustain their destructive trade.

POACHERS AND THEIR METHODS

Wildlife poaching involves criminals at local, transnational and global levels. Those on the ground with the guns tend to be locals, including some criminals who sneak in from the bordering countries of Namibia, South Africa and Zimbabwe.

Management of the poaching networks tends to be the same despite national borders. So, for example, poachers working in Botswana and Zimbabwe would likely be overseen by the same criminal groups. After an animal is poached, contraband often is sent to Asian countries, such as China or perhaps Vietnam, so the networks clearly extend beyond the African continent.

“I think in terms of arrests and contacts, we normally make contacts with the locals and the neighboring countries,” Barwabatsile told ADF. “Where we have come across those from the Far East is in roadblocks, where they will have concealed the contraband in the form of maybe shaping it into a walking stick or putting it as powder or in some small jewelry, having converted it already.”

Poachers also are increasingly using technology to track and kill their prey. Hunters use rifles equipped with high-powered telescopic sights and global positioning systems to make their way through areas where targeted animals roam. They communicate using cellphones, and when mobile service is not available, they have been known to use satellite telephones, Barwabatsile said.

“So they have quite a number of things that we can say they are leveraging on technology,” he said. Poachers’ continued ability to adapt and employ technology poses a significant challenge to anti-poaching forces. “I think as technology develops, the poachers are also harnessing it, and we can only be ahead of them if we innovate in this technology and try to be ahead of them.”

Poachers’ ruthlessness and ingenuity also extends beyond the animals they are poaching, especially if it will help them conceal their identities and avoid arrest. In June 2019, poachers in Botswana poisoned the carcasses of three elephants they had killed. The poison, in turn, killed 537 vultures — most of which were endangered — and two tawny eagles that had scavenged the elephants’ remains, Agence France-Presse reported. Killing the vultures keeps them from circling in the sky and tipping off rangers to poached animals. 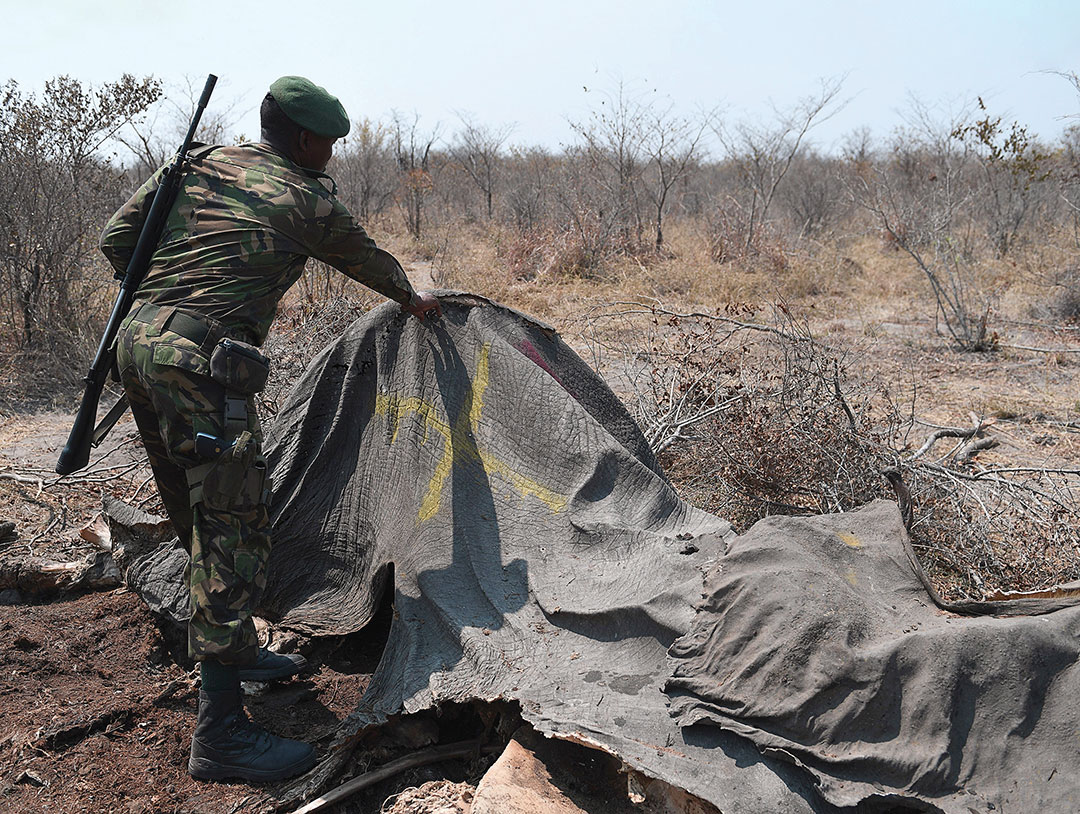 A BDF officer marks a dead elephant believed to have been poached in Chobe. AFP/GETTY IMAGES

HOW BOTSWANA FIGHTS BACK

Botswana’s commitment to fighting poachers is evident in the existence of Barwabatsile’s position. In addition to being a BDF officer, he serves as chairman of the National Anti-Poaching Coordinating Committee. The committee takes a whole-of-government approach to fighting poaching that enlists personnel from the BDF and civilian agencies to carry out the National Anti-Poaching Strategy.

The strategy stresses the importance of interagency cooperation, which the BDF coordinates. The lead agency is the Department of Wildlife; others are the Botswana Police Service’s Narcotic, Fauna and Flora Investigation Unit and the national Directorate of Intelligence and Security Services. “These are the main stakeholders in counterpoaching operations,” Barwabatsile said.

BDF personnel are on the ground throughout the country, and their constitutionally mandated priority is territorial integrity and border security. However, anyone serving in the BDF is authorized to conduct counterpoaching operations in their area of deployment. “They have a countrywide footprint,” Barwabatsile said.

The committee, headquartered in Gaborone, has about 20 people and synchronizes counterpoaching efforts. “We encourage agencies to bring personnel who are dealing with planning for operations and intelligence or investigations,” he said. “So those are the core of the committee.”

At the regional level, BDF commanders meet weekly with police officials, the Directorate of Intelligence and Security Services, and the Department of Wildlife. When there is poaching,  police officials handle forensics. Wildlife department doctors are brought in to handle animal pathology, and Soldiers provide security and protection. “So all of this, we take it as complementing each other,” Barwabatsile said.

Current anti-poaching efforts have their roots in traditions that predate Botswana’s independence. Back then, local chiefs would control hunting, such as when and where it was allowed, and the number of animals that could be killed. Penalties awaited scofflaws. “Subsequently after independence, the government took a deliberate decision in terms of protection, conservation and management,” Barwabatsile said. “Its policies have always been talking to those matters. And this National Anti-Poaching Strategy is just coming to reinforce those policies that were already established.” 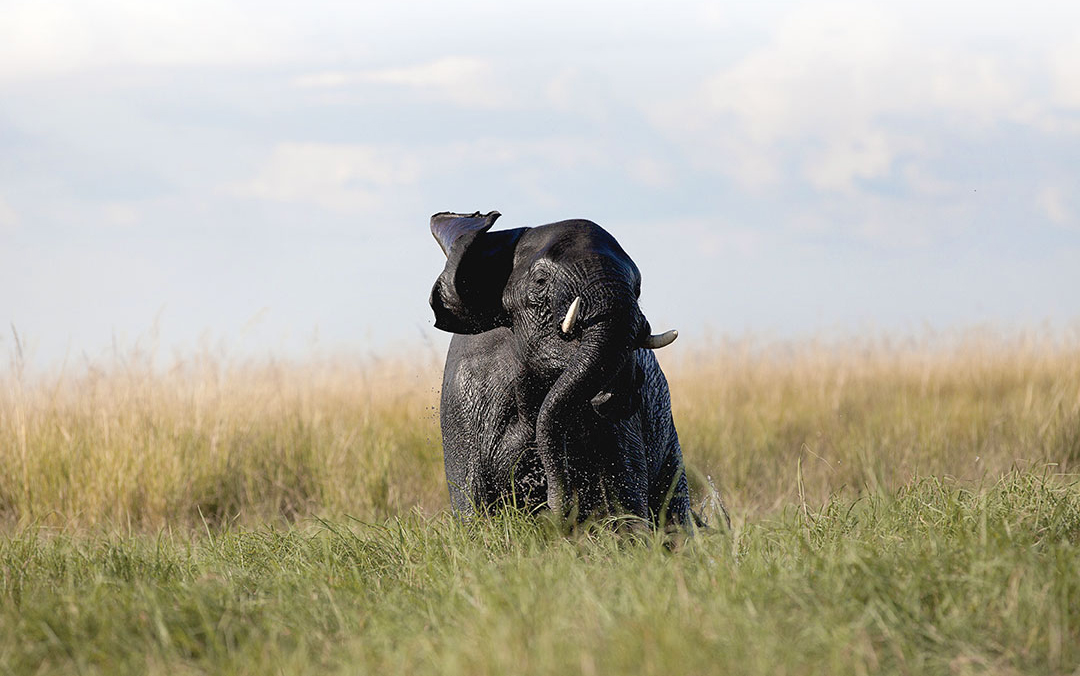 Cooperation is the life blood of Botswana’s efforts, and that work does not stop at the national boundary. The nation’s strategy is informed by the Southern African Development Community Law Enforcement and Anti-Poaching Strategy, passed in 2015. Its objectives include:

Promoting wildlife law enforcement “within, between and among” member states.

Barwabatsile said security chiefs meet regularly to discuss these matters, and information from their exchanges “trickles down” to those at the technical levels. “We cooperate with [neighboring countries]; we meet from time to time. Sometimes we even hold joint patrols, and there are JPCs — joint permanent commissions — between these countries.” The cooperation and regular communication pays dividends in terms of intelligence and operations, especially with Botswana’s closest neighbors: Namibia, South Africa and Zimbabwe. Botswana also interacts to a lesser extent with Angola and Zambia.

The establishment of transfrontier preserves, such as Kgalagadi Transfrontier Park, allows for additional cooperation. Kgalagadi opened in 2002 through an agreement with Botswana and South Africa, creating the first park of its kind on the continent. Both countries share and jointly manage the park’s 37,000 square kilometers as a protected area. There is no fencing, so animals can move freely along their established migration routes through the desert, according to Botswana Tourism Organisation. Three-quarters of the park is in Botswana. The rest is in South Africa. 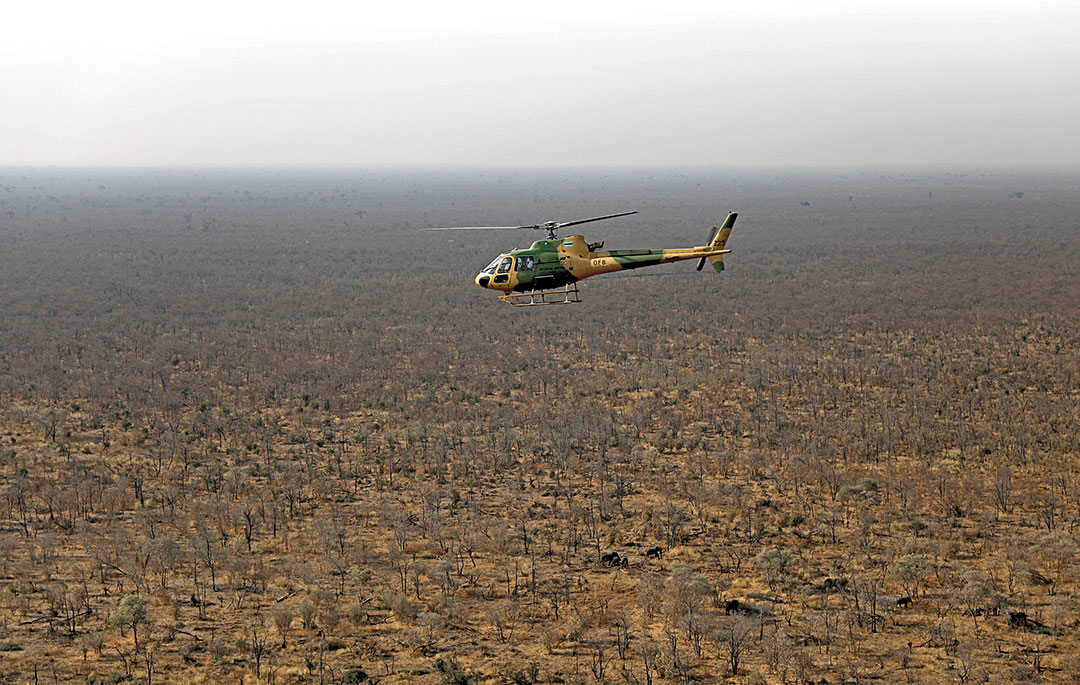 A Botswana military helicopter flies over a herd of elephants in the Mababe area. REUTERS

Rangers at the park, and at others like it, can patrol the entire area regardless of national boundaries, something military forces cannot do.

Despite the progress and success, there is room for improvement. Barwabatsile said he would like to see more formal cooperation with agencies such as Botswana Unified Revenue Service, which deals with customs financial issues, and the Financial Intelligence Agency, which can help fight money laundering tied to poaching. Anti-poaching forces also will have to continue innovating with technology to keep up with tech-savvy poachers. Finally, anti-poaching forces must balance the concerns of a diverse array of stakeholders to be successful.

“If you look at the NGOs [nongovernmental organizations], there are those who are focused on tourism, those that are focusing on conservation — all of them have varying interests, and we have to find a common ground when it comes to protecting the wildlife,” Barwabatsile said.

← Stronger Together
Crime on a Global Scale →