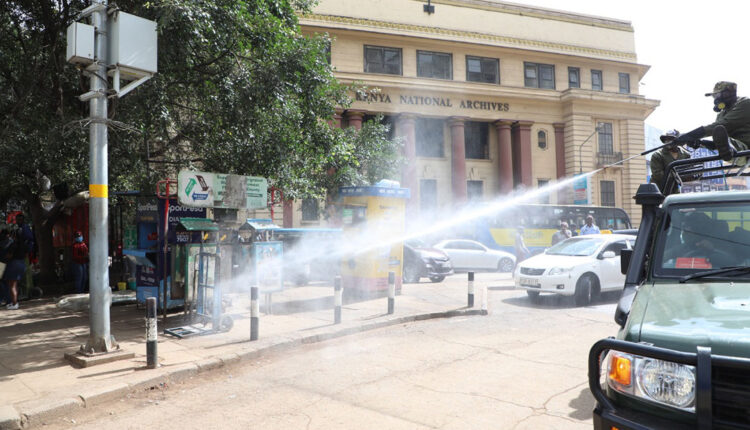 For nearly three months, Kenya’s nationwide COVID-19 lockdown has disrupted lives across the country. As a result, the nation’s military has been called upon to boost the response to the disease.

In the process, Kenya Defence Forces (KDF) have had two new duties added to their mission: disinfection and food distribution.

On June 15, a KDF disinfection team patrolled the streets of Nairobi’s Utawala area, spraying disinfectant on the streets, walls and public spaces. The KDF have performed similar operations in Nairobi’s Central Business District as well as Fedha Estate and other areas.

In recent weeks, Navy personnel joined the Kenya Red Cross Society and authorities in Mombasa County to deliver emergency food aid to families in communities such as Shika Adabu, Vyemani and Likoni. Air Force personnel joined other KDF teams to deliver 5 tons of food and other supplies to residents of the Kulesa community and the Boni Enclave in Northeast Kenya.

The KDF has set up a Corona Treatment Centre at the Kabete Barracks in Nairobi and has launched special procedures, including disinfecting weapons during the changeover of guards. It’s all part of an effort to “Komesha Corona,” which means “Stop Corona” in Swahili. The military also has launched a public education campaign urging Soldiers to “change step” and adjust to the “new normal.”

The KDF also donated 102 million Kenyan shillings (just under $1 million) to the nation’s COVID-19 Emergency Response Fund. The money came from a voluntary pay cut by KDF servicemen and women.

KDF is part of a broad movement across the continent in which national militaries are using their logistical, medical and organizational capacities to help their nations’ civilians battle the spread of COVID-19.

The strategy represents a shift away from earlier deployments of the military to enforce lockdowns and social-distancing regulations, steps that Tunisia, South Africa and other nations took early in the outbreak.

In Uganda, troops are joining civilian authorities in distributing food and supplies. In Ghana, one of the 10 African nations hardest hit by the virus, as well as in Senegal, the national militaries have deployed field hospitals provided by U.S. Africa Command to help defray the impact of COVID-19.

The KDF also deployed 4,500 beds across three sites early in the outbreak to prepare to treat COVID-19 patients. At one point, military helicopters flew above Kenyatta National Hospital in Nairobi trailing banners that read “God Bless Medics” and “Stay Home.”

These deployments are happening as COVID-19 cases continue to grow rapidly across the continent. In Kenya alone, authorities reported 1,471 cases on May 27. By June 16, the number had nearly doubled to 3,727 cases. Kenya reported its first COVID-19 case on March 6.

As in other countries, the elusive nature of the virus challenges KDF efforts to fight it in the nation at large and on KDF bases. Symptoms can vary from severe to mild depending on the patient, KDF Memorial Hospital Brig. Dr. Milton Obilo told KDF publication Majeshi Yetu.

“However, others might be infected but have not shown any symptoms,” Obilo said.