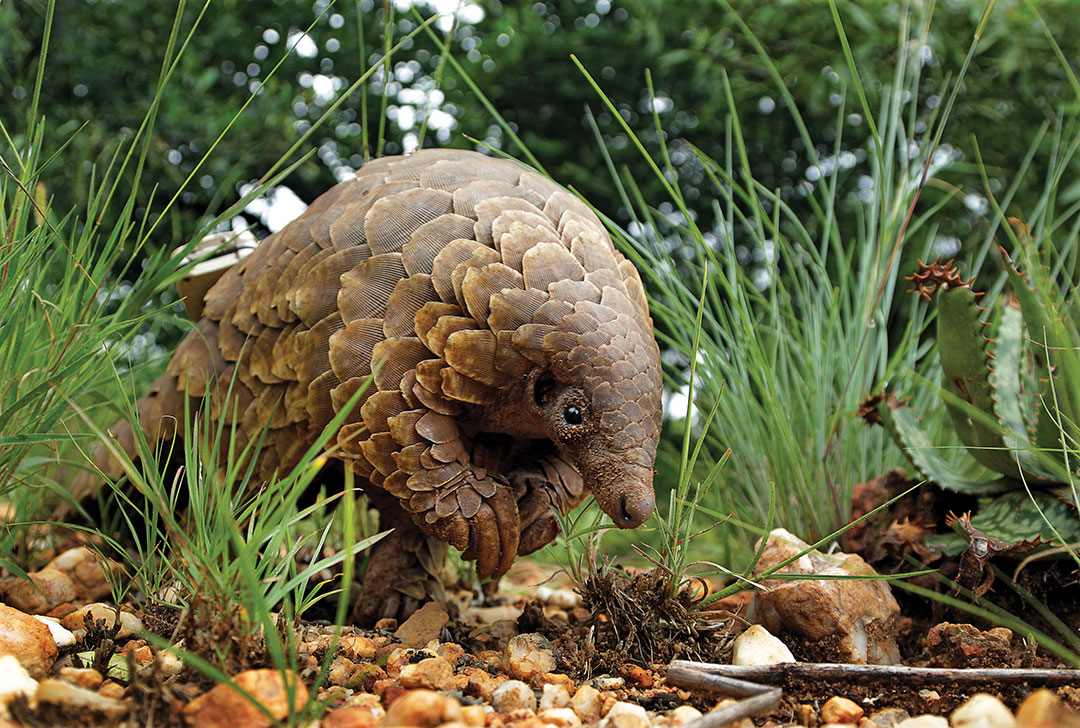 As China’s influence expands, so does its traditional medicine. That’s bad news for endangered animals in Africa.

China’s extensive “One Belt, One Road” policy is intended to spread the country’s influence from East Asia to Europe and beyond. The project, conceived by Chinese President Xi Jinping in 2013, envisions a vast network of railways, highways and energy pipelines.

The project isn’t just about infrastructure. China also intends to spread its culture, which includes traditional Chinese medicine (TCM), throughout the world. And that will be a problem for the nations of Africa.

China’s State Council plans to promote its traditional medicine in Africa by setting up hospitals, museums, medicinal schools and botanical gardens as a means of legitimizing the treatments. Some aspects of TCM, including acupuncture and tai chi, have been found to be useful relaxation techniques and an alternative to aspirin in relieving low-level pain. But the vast majority of TCM is focused on unproven herbal products, treatments, and potions that are offered in place of modern-day clinically effective, doctor-prescribed medicine. In addition to the disappointment and frustration that inevitably comes from alternative TCM failure, patients also may develop other side effects that will make their conditions worse.

Research has shown that some TCMs make people sick rather than healing them. A common ingredient, aristolochic acid, can harm kidney function and cause urinary tract cancer.

Additionally, TCM often promises cures based on the use of animal products, including pangolin scales, rhino horns, shark fins and tiger parts. Such products invariably are useless, but as TCM spreads, so does the demand for the endangered animals.

“Studies have found that ingredients in herbal remedies are sometimes mislabeled and can contain extracts from endangered animals or toxic plants in place of the advertised ingredients,” News-Medical.net reported. “Given the extent of use of TCM and the reach of such trade, these undesirable ingredients can reach a wide number of patients and could have profound effects on the ecosystems from which they are taken.”

In the first three months of 2019, authorities in the Chinese territory of Hong Kong seized record volumes of threatened species, including 8.3 metric tons of pangolin scales from nearly 14,000 pangolins, and the territory’s largest-ever confiscation of rhino horns, worth more than $1 million. Reuters has reported that Hong Kong is one of the world’s primary wildlife trafficking transit points, supplying animal parts to mainland China and other parts of Asia.

The conservation group ADM Capital Foundation says TCM is responsible for more than 75% of the trade in endangered wildlife products in Hong Kong over the past five years.

The World Health Organization says the TCM industry is worth $60 billion a year and is projected to expand by about 11% each year. That is good business for China, which seeks to promote this new industry and use the infrastructure built under the Belt and Road plan to supply its TCM products.

Although many practitioners of TCM have condemned the use of endangered wildlife products, such products are still popular in China and the rest of Southeast Asia, where they are sold to patients with false claims of being able to treat everything from epilepsy to impotence and cancer. Additional TCM false claims include:

Bear bile to treat liver ailments and headaches. Donor bears often are kept in cages, under intolerable living conditions. Some have permanent catheters to extract the bile.

Pangolin scales and other parts of the animal used to treat “excessive nervousness and hysterical crying in children, women possessed by devils and ogres, malarial fever and deafness,” the International Journal of Science said.

Dried seahorse as a treatment for kidney ailments, circulatory problems and impotence. The group Advocacy for Animals says that 32 countries and regions are involved in harvesting 20 million seahorses each year, yet production is failing to meet the worldwide demand. In recent years, China’s demand alone has been 200 to 250 tons of the tiny creatures annually.

Although China has banned rhino horn, the nation has failed to prevent the use of other animal products in medicines. Products made from pangolin scales and antelope horns are legally used in Chinese medicine. Reuters reported that two Chinese companies, Kangmei Pharmaceutical and Tong Ren Tang, have been given government permits to produce medicines made from such scales and horns.

Gui Zhen Tang, which owns a bear-breeding center in southern China, dropped plans in 2013 to expand its bear bile production after protests by animal rights activists and nongovernmental organizations (NGOs). But it still has government permits for extracting bear bile.

There is no scientific basis for pangolin scales to have any medicinal value, and yet the small, harmless creature is now the world’s most-poached animal. There are eight species of pangolins. Four are found in Asia and are listed by the International Union for Conservation of Nature as critically endangered. The union says the four African species — Temminck’s pangolin, giant pangolin, white-bellied, and black-bellied — are listed as vulnerable. In 2016, the 186 countries involved with the Convention on International Trade in Endangered Species voted to ban the commercial trade in pangolins.

That has not stopped the trafficking of the animals. The demand in China and Southeast Asia for the scales and meat of the pangolin has only increased its value.

In April 2019, customs officers in Singapore inspected a shipping container supposedly full of frozen beef from Nigeria. Instead, reported New Economy Forum, they found almost 13 tons of pangolin scales, valued at $39 million. Less than a week later, they found a similar stash in a container that was labeled as containing cassia plant seeds. In all, poachers slaughtered 72,000 pangolins to produce the two stashes.

Pangolins have something in common with rhinos. Pangolin scales are made of keratin, the same material that makes up rhino horn, and human fingernails and hair. Consuming pangolin scale products is as effective a medicine as chewing on one’s own fingernails. National Geographic said the scales are typically dried and ground into powder, which may be turned into a pill.

Bloomberg news service reported that the pangolin network stretches from poachers in Central Africa to smugglers in Nigeria to middlemen across Asia, to consumers in China and Vietnam. The major African source countries are thought to include Cameroon, the Central African Republic and the Democratic Republic of the Congo.

Pangolins are not an easily replenishable species. Females of the African species typically give birth to a single offspring — the Asian pangolins can have one to three — and the offspring take two years to mature before they leave their mother.

There is a surprising amount of trade in live pangolins, mostly to Southeast Asia, where they are eaten. People who eat pangolin prefer that the meat be freshly killed, requiring that live animals be shipped. The animals are easy to load into boxes and bags, because when caught, they roll into a compact ball as a means of defense. The live pangolins arrive at their destinations in horrible conditions — confined to small spaces, covered in their own waste. On the occasions when authorities recover the poached animals, they are often in wretched shape, needing serious medical care.

In South Africa, Dr. Karin Lourens, a veterinarian, is known as Africa’s “pangolin doctor” for her work in caring for Temminck’s pangolins rescued from traffickers. It seems that caring for the African animals is more difficult than treating their Asian cousins.

“Very little is known about the Temminck’s ground pangolin,” Lourens told Voice of America. “They have already had this poaching epidemic in Asia for quite a long time. So, they have had lots of time to do research on theirs. Whereas we get one at a time. Asian pangolins in captivity will eat out of a bowl. Ours do not. They have to be taken out into their natural environment and followed almost while they feed.”

In some ways, China appears to be cooperating in world efforts to stop the poaching of pangolins. In 2017, Chinese customs officials seized 13 tons of illegally imported pangolin scales. But the Chinese government has not banned the use of the scales.

The China Biodiversity Conservation and Green Development Foundation, an NGO, noted that more than 200 pharmaceutical companies in China produce about 60 brands of traditional medicines that include pangolin scales. The foundation said that China lets the companies use 29 tons of the scales each year, as long as they are obtained legally. It takes 73,000 slaughtered pangolins to produce that many scales.

The foundation also noted that when it sent teams to southern China’s provinces to investigate the black market trade in pangolin scales, it found restaurants that were serving pangolin meat.

The Chinese market for pangolin is pushing the Indian breeds to the point of extinction. The World Wildlife Fund (WWF) said the population of Indian pangolins decreased by 80% between 2013 and 2018.

To protect pangolins and other species being funneled into Asia’s black markets, the WWF is working on campaigns to reduce demand for illegal wildlife products in China and other countries in Southeast Asia. The group also is lobbying “for more effective national laws and antipoaching programs — measures needed to keep these animals out of markets and in the wild where they belong.”

If nothing is done, the Indian pangolins will become extinct — and poachers will undoubtedly focus on the pangolins in Africa.

A History of Traditional Chinese Medicine

Traditional Chinese medicine, also known as TCM, is a system of health care dating to the third century B.C.

It was developed from the writings of ancient healers, who had begun making notes on their observations of the body, its functions, and its reactions to various treatments and therapies, including herbal remedies, exercise, massage and acupuncture.

“For more than 2,000 years, generations of healers and scholars added to and refined this knowledge,” reported National Geographic magazine. “The result is a canon of literature dealing with practically every sort of health issue, from the common cold to cancer, pregnancy to old age.”

China’s interest in using parts from what are now endangered species dates to the beginnings of TCM. The rarity of such animals, including rhinos and tigers, in ancient times meant that only the wealthiest of Chinese people, including royalty, could afford them. That only served to raise the perceived value of the medicines to the masses who could not afford them — a perception that persists today.

TCM has spread to an estimated 180 countries. However, Western practitioners of TCM regard the use of endangered animals as pure quackery.

China has made some attempts to reduce the demand for rare animals. China signed the Convention on International Trade in Endangered Species of Wild Fauna and Flora in 1981, but as Adam Minter of Bloomberg News reported, the country still had 116 factories making wine from tiger parts in 1986.

China imposed a 1993 ban on the sale, purchase, import and export of tiger bones and rhino horns, but the ban only drove the trade in such endangered species underground.

Today, China can be described as a “two medicines” nation because it has endorsed purely science-based medical treatments and TCM.