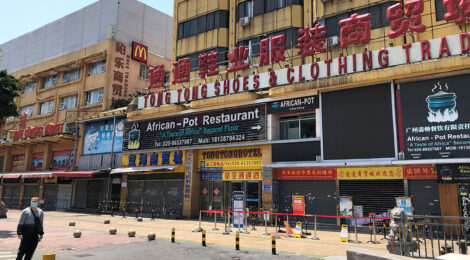 Frank Nnabugwu, a Nigerian businessman living in Guangzhou, China, was released from two weeks of quarantine only to find he had nowhere to live. He was barred from returning to his rental home.

“The security guards said to us: ‘No foreigners are allowed.’ I was upset, very upset. I slept on the street,” Nnabugwu told The Guardian. He is one of an estimated 14,000 Africans, mostly students and business people, living in Guangzhou.

Police eventually found a hotel willing to rent him a room.

“We use the receptionist to order food,” he said. “If [food delivery companies] know it is a foreigner ordering food, they will not come. You cannot buy anything in a shop. If you go in, they will cover their face and chase you out.”

In April, as news reports and social media videos depicting discriminatory treatment of Africans living in China surfaced, officials from across Africa and around the world responded with disgust.

Although Chinese officials assured African governments that the racist treatment would stop, Africans in Guangzhou, China’s third-largest city, report that they are still being evicted from their homes, forcibly tested for the coronavirus, and denied entry into hotels, shops and restaurants.

A Ugandan woman told BuzzFeed that employees of a 7-Eleven convenience store locked the door when she tried to enter and began spraying disinfectant around the store. They eventually cracked the door open just enough to spray disinfectant at her feet. Hungry, she went to a nearby McDonald’s, but was turned away. At a supermarket, she was told, “You’re a foreigner, you’re not allowed here.”

The woman, who provided only her first name, Darasa, posted a Facebook video decrying the “super racist” treatment. She was then visited at her hotel by two groups of police officers who demanded that she delete the video. They also gave her a face mask, hand sanitizer and tea bags.

“We’re in their country, so they can still do whatever they wish to us,” she said.

Another viral video showed an Ethiopian diplomat being denied access to a shopping mall in Guangzhou, according to The Reporter, an Ethiopian newspaper, which responded to that and other instances of Chinese mistreatment of Africans with a scathing editorial.

“Curiously, none of these maltreatments have been reported for investigations and prosecution by the Chinese authorities,” the editorial said. “But these are clear pieces of evidence that not a few Chinese bear a hostile attitude toward Africans.”

Other foreign groups in Guangzhou have not been subjected to similar treatment.

“Chinese authorities claim ‘zero tolerance’ for discrimination, but what they are doing to Africans in Guangzhou is a textbook case of just that,” said Yaqiu Wang, China researcher at Human Rights Watch. “Beijing should immediately investigate and hold accountable all officials and others responsible for discriminatory treatment.”

Carine Kaneza Nantulya, Africa advocacy director at Human Rights Watch, urged African governments to press China to enact measures that prevent future discrimination and “carry out prompt and transparent investigations to hold to account all those responsible for discriminatory practices.”

In Africa, more than 300 human rights groups and almost 1,800 activists sent an open letter to the chairman of the African Union Commission, Moussa Faki, calling for “immediate remedial action” over the “xenophobic, racist and inhuman treatment of Africans in China.”

“Africans have been subjected to 14 days of quarantine even if they have not traveled outside their jurisdictions or come into contact with infected persons, or had close contact or showing any symptoms of COVID-19,” the letter said. “This treatment is in violation of international human rights laws and principles. It is inhuman and against all principles of dignity and shared humanity that should ideally guide China-Africa relations.”

“All foreigners are treated equally,” Zhao Lijian said. “We reject differential treatment, and we have zero tolerance for discrimination.”

But on social media, the hashtag #blackchina has gained traction among Africans enraged over the discrimination.

Twitter user Peter Kariuki urged African officials to devise a plan to save Africans suffering in China. “Let Africans be treated well in China,” he wrote. “We can’t keep soothing them just because we owe them. Let’s speak out.”

In a widely published open letter to Chinese President Xi Jinping, Arikana Chihombori-Quao, president of the Africa Diaspora Development Institute, called on him to “put an immediate end to the harassment, intimidation and inhumane treatment meted out to African brothers and sisters, sons and daughters living in your country.”

“The line has been crossed, and enough is enough!” she wrote. “We demand immediate reciprocity. Chinese citizens must treat Africans in China in the same way that they would want their citizens to be treated in Africa.”