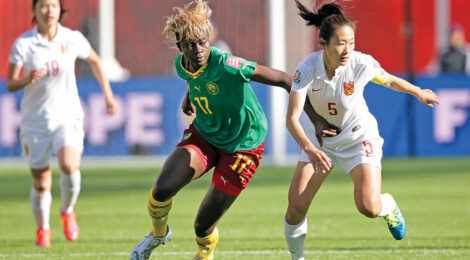 Cameroon’s top female football star has opened an academy to teach the sport to girls. The academy is the first of its kind in the country, where football is still largely considered a boys’ sport.

Gaelle Enganamouit, a 27-year-old football star, never had any formal training. But she said having a football academy for girls will develop Cameroon’s players into world stars.

“The foundation has as its objective to promote women’s football so we can see the impact.” she said. “In 2016 here with the African Cup, I was so impressed. I said I have the opportunity to open this foundation; I can do it.”

As a young girl, Enganamouit had a passion for football. Her family rejected her love of the game because football was considered a boys’ sport. But Enganamouit’s determination led her to play at the national level and also with a Norwegian club.

Ghislain Bebben, one of the coaches selecting players for the academy, said she was impressed with the talent she has seen.

Rails Football Academy manager Frank Happy said they will choose 18 players for each age category. He said they’ve prepared a training program that does not clash with the girls’ academic progress. Formal education, he said, will be vital not only in the girls’ lives but also to their careers as professional players.