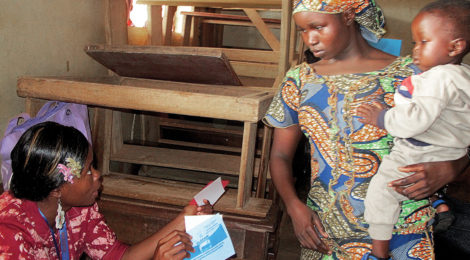 Political parties in Cameroon have set an ambitious goal in 2018 — to put women in at least 30 percent of elected offices.

Three hundred women selected from associations around Cameroon have been campaigning in markets, universities and popular spots in the capital, asking women to register to vote.

Cameroon will have a series of important elections in 2018 — local, parliamentary and presidential. Political parties have made public commitments to achieve a United Nations-established benchmark of at least 30 percent female representation. The government has echoed that commitment, calling on parties to put forth a higher number of female candidates.

To meet the gender goal, women would need to win at least 20 of the 70 senatorial seats up for grabs, and President Paul Biya would have to include women among the 30 senators that the constitution calls on him to appoint.

Observers say the odds of success are long, at least in the short term.

Cameroon has 386 mayors. Just 26 are women. In the National Assembly, women occupy one-third of the seats in the lower house, but the upper house is just 20 percent women.

Sen. Julienne Djakaou of Cameroon’s Far North region says many women are not able to participate in decision-making because of traditional misconceptions and early marriage, which derails their education.

She said she did not believe it when men in her community said the Bible prohibits women from participating in politics, so she went to seek advice from the highest member of the Roman Catholic Church in Cameroon, Cardinal Christian Tumi. She said he told her that politics was for both men and women. But some male politicians argue that women aren’t ready and that Cameroon needs to get more women to vote before it can get more women in office. Women constitute 52 percent of the country’s population. Yet, according to official figures, women account for just 30 percent of the 7 million people registered to vote in 2018’s polls.