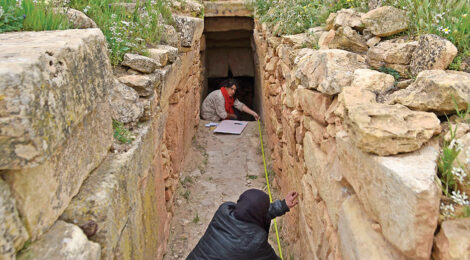 Algeria’s pyramid tombs, called the Jeddars, are unique relics of an ancient era. The 13 monuments, whose square stone bases are topped with angular mounds, are on a pair of hills near Tiaret, 250 kilometers southwest of the capital, Algiers.

Built between the fourth and seventh centuries, the tombs are believed to have been the final resting places for Berber royalty. Some are as tall as 18 meters.

Algerian authorities and archaeologists are pushing to get the Jeddars listed as a UNESCO World Heritage site. About 20 archaeology students and their teachers have been working at the monuments.

When the Jeddars were built, Berber kings ruled the area in small fiefdoms whose history is poorly known and of which few traces are left. It was a period of great unrest for the former Roman province of Numidia. As the Western Roman Empire collapsed, Vandal and Byzantine troops invaded, and Arab forces stormed across North Africa.

The research team has been working on Jeddar A, which sits on Mount Lakhdar along with monuments B and C. The remaining Jeddars are on a hilltop 6 kilometers away, Mount Arouri, and are known by the letters D through M.

Each contains at least one room, with the largest mound giving way to a labyrinth of 20 compartments, including funerary chambers.

Inside the tombs, traditional Christian symbols, hunting scenes and animal figures are carved above doors. Traces of inscriptions believed to be Latin mark the walls, but time has rendered them unreadable.

The Jeddars were built centuries after other imposing pre-Islamic funerary monuments, which are found in present-day northern Algeria, making them the last of their kind to be erected before the arrival of Islam. “The most distinctive feature of the Jeddars is by far the date of their construction,” said Algerian archaeologist Rachid Mahouz.