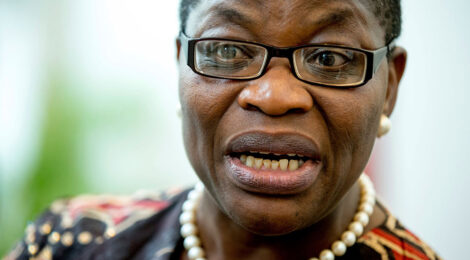 Where’s our bailout? That’s what some African leaders are saying as the deadly COVID-19, thought to have originated in a “wet market” in the Chinese city of Wuhan, sweeps across the continent, killing people and strangling already fragile economies.

In a widely published opinion piece, Obiageli “Oby” Ezekwesili, a former Nigerian Cabinet minister and former vice president of the World Bank, argued that China should write off roughly $145 billion that its government loaned to African countries between 2000 and 2017.

In Africa, an estimated 20 million jobs are at risk as a result of the COVID-19 pandemic and the economic difficulties it has created. Across the continent, mandatory lockdowns are forcing businesses to close, causing economies to contract.

“The economic shock has been caused by a crisis that emerged from China,” Ezekwesili wrote. “It is one that has badly reduced the opportunity Africa would otherwise have had to lift hundreds of millions out of poverty and reduce inequalities.”

Her thoughts are echoed by Ghana’s finance minister.

“My feeling is that China has to come on stronger,” Ken Ofori-Atta said in a Reuters report. “African debt to China is $145 billion or so, over $8 billion of payments is required this year. So that needs to be looked at.”

Much of Africa’s debt to China is related to the sprawling One Belt, One Road (OBOR) project, aimed at expanding trade by building roads, railways and ports. China lists 39 African countries on its official Belt and Road website, ranging geographically from Tunisia to South Africa.

There is no official figure for total Chinese investment into Africa, but a recent estimate from the China Africa Research Initiative at Johns Hopkins University puts the total at about $5 billion per year.

From 2000 to 2017, the Chinese government, banks and contractors signed $146 billion in loan commitments to African governments and their state-owned enterprises, according to a recent report by the initiative. Angola is the top recipient of Chinese loan commitments at $43 billion over 17 years.

Chinese loans to poorer countries are widely denounced as predatory.

Harvard Business Review recently reported that China has extended “many more loans to developing countries than previously known,” due to a lack of data and transparency. That has resulted in a “hidden debt” problem, meaning “that debtor countries and international institutions alike have an incomplete picture on how much countries around the world owe to China and under which conditions.”

In total, the Chinese state and its subsidiaries have lent $1.5 trillion in direct loans and trade credits to more than 150 countries. A dozen countries owe debt of at least 20% of their nominal gross domestic product to China, including Djibouti, Niger, the Republic of the Congo and Zambia.

“The biggest concern is that several African countries will be left with huge debts and grandiose infrastructure that they cannot maintain and run profitably,” said Obert Hodzi, an international relations expert at the University of Helsinki in Finland. “I liken it to borrowing money to buy a Tesla when you don’t have adequate access to electricity.”

Hodzi told the South China Morning Post that the Addis Ababa-Djibouti and Mombasa-Nairobi railways were examples of huge projects financed by Chinese loans that were not sustainable, forcing African governments to seek further Chinese assistance.

As African debts to China mount, many businesses on the continent are suffering huge financial losses. African airlines are expected to lose $6 billion in revenue this year due to flight restrictions to stem the spread of COVID-19, which has infected more than 64,000 people on the continent and killed almost 2,300.

The Economic Commission for Africa has warned that the pandemic crisis could mean a $65 billion revenue loss as crude oil prices plummet. In Nigeria alone the pandemic could reduce total exports of crude oil in 2020 by $14 billion. Africa also could lose $101 billion in revenue from exported fuels this year.

Chinese reaction to the opinion piece by Ezekwesili indicates that the communist nation has no intention of paying reparations to Africa or to the scores of governments across the world calling for compensation. A rebuttal to Ezekwesili printed in The Guardian said her remarks “make no sense at all.”

In response, Ezekwesili said Chinese officials “failed to adhere to basic scientific and research transparency in the critical early days of the COVID-19 outbreak in Wuhan” and must “accept responsibility with humility.” Part of that responsibility, she argues, is to erase nearly $145 billion in loan debt.

“Following this debt cancellation, an international consortium made up of the G20, China, African Union Commission and global institutions like the United Nations, World Bank and IMF [International Monetary Fund] should be constituted to assess the full extent of damages and the compensation due,” she said.