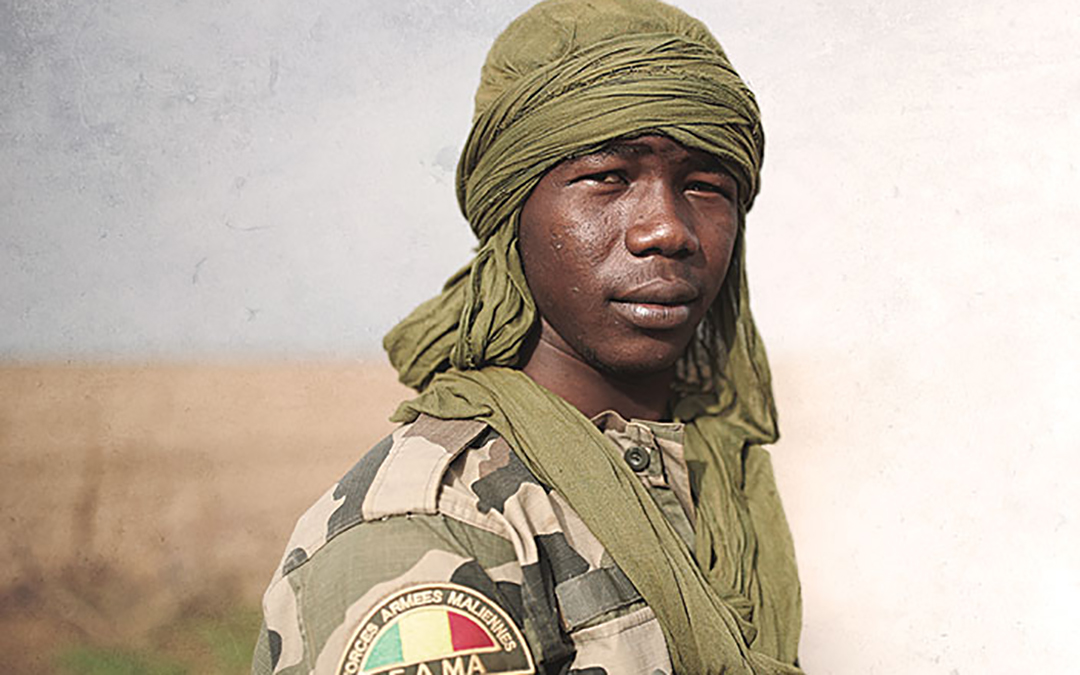 A New Center of Violence

Extremism in Mali has Shifted to the Central Region, Where One Group Feeds on Ethnic and Cultural Tensions

Mali has been a cauldron of violence since early 2012, when a Tuareg rebellion and military coup threw the nation into sustained chaos. Unrest that began in the north prompted an intervention by French and Chadian forces, as well as a huge United Nations peacekeeping operation that continues today. These forces reversed or halted rebel advances into major cities and toward the capital, Bamako.

Since 2015, however, violence has intensified and shifted its center of gravity to central Mali, primarily in the Mopti and Ségou regions. “Confronting Central Mali’s Extremist Threat,” a paper written for the Africa Center for Strategic Studies by researcher Pauline Le Roux, states that central Mali is now the nation’s most dangerous region. The numbers are staggering:

More than 60,000 have been displaced by violence.

Several militant groups remain active in Mali even after years of security efforts. Some new groups have emerged, and others have morphed and combined. For example, the Jama’at Nusrat al-Islam wal-Muslimin (JNIM, or Group to Support Islam and Muslims) is a coalition of five groups, including Ansar al-Dine and Al Mourabitoun. But one coalition member, a relatively new player in Mali, stands out. Unlike al-Qaida-linked groups, this one has capitalized on local struggles by exploiting ethnic tensions.

The Macina Liberation Front (FLM) — also known as Katiba Macina — now is the most lethal and active group in the region. Le Roux’s paper explains that FLM was involved in nearly two-thirds of all violent incidents in central Mali and a third of the violent events nationwide.

The FLM’s message is rooted in a combination of central Mali’s history, the region’s violent contemporary landscape and its underlying ethnic tensions.

THE RISE OF THE FLM

The FLM began in early 2015 and claimed it would bring back the Macina Empire, a rigid, mostly Fulani theocracy that ruled the area from Ségou in the south to Timbuktu in the north from 1818 to 1863. “FLM has drawn on narratives of this historical empire to gain popular support, with the overarching goal of taking over the territory in central Mali and substituting itself for the Malian state,” Le Roux wrote.

Like its namesake, the FLM recruits mainly, but not exclusively, from the region’s Fulani pastoralist population. As military efforts began pushing militants out of the north in 2013, many of them resettled in the central part of the country. As violence ramped up there, the state retreated, allowing for growth and expansion, according to an April 2019 article for The Broker website by researchers Natasja Rupesinghe and Morten Bøås.

When it began, FLM was closely aligned with the Tuareg group Ansar al-Dine and its leader, Iyad Ag Ghaly. FLM’s leader was Amadou Koufa, a Fulani preacher from Mopti who began as a griot, or traditional poet, but later became radicalized. In 2012, he joined Ansar al-Dine and in January 2013 led an attack on the town of Konna that included the Tuareg group, al-Qaida in the Islamic Maghreb and the Movement for Unity and Jihad in West Africa (MUJAO), Le Roux wrote. (Koufa is thought to have been killed by French forces in November 2018.) 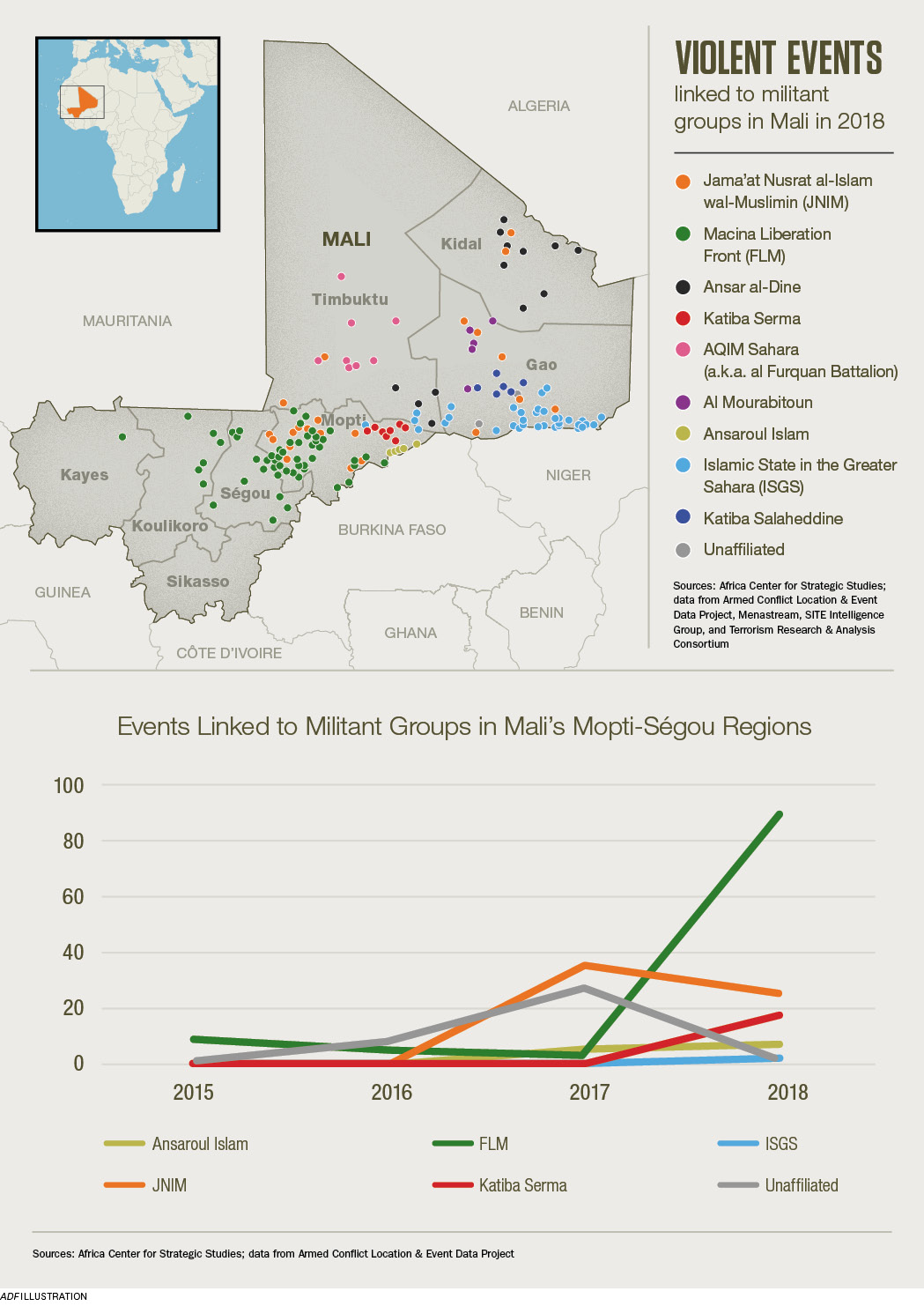 Koufa continued working with other militant groups, such as MUJAO and Al Mourabitoun. It was not until early 2015 that FLM was credited with its first attacks, against military targets in Boulkessi, Nampala and Ténenkou villages. According to Le Roux’s paper, FLM followed with a series of high-profile attacks:

In August 2015, the group attacked the Byblos hotel in Sévaré, killing 13 people. Among them were four Malian Soldiers and five contractors from the United Nations peacekeeping mission in Mali.

In November 2015, the FLM claimed responsibility for the bloody attack on the Radisson Blu hotel in Bamako that killed 22 people. Al Mourabitoun also said it was responsible for the attack.

“In total, FLM is likely to be directly responsible for the death of hundreds of Malian military personnel,” Le Roux wrote. Its size could range between several hundred and several thousand members, especially if including informants and those who provide other support. The group controls several central Malian villages.

Koufa’s group built a power base in the villages it controlled through coercion and fear. A November 2018 report by the International Federation for Human Rights (FIDH) and the Malian Association of Human Rights explains that the FLM is not like most armed insurgent groups. It is “above all a social revolt, particularly of nomadic Fulani shepherds, to overturn an established, predatory order, catalysed by a charismatic preacher from the region,” the report states.

Starting in 2015, FLM has executed and kidnapped state officials, including defense authorities, water and forestry agents, municipal officials, judges, teachers, and anyone considered a government collaborator. Its intent is for state officials to withdraw so that it can take over security, judicial, educational and economic functions. By the end of the 2018 school year, 478 schools had closed in Mopti and Ségou, including more than two-thirds of all Mopti schools.

With military and government authorities out of central Malian villages, FLM is left unopposed to enact Shariah, settle land disputes, handle criminal and social disputes, manage resources, and impose taxes called zakat. The group enacts strict religious codes and gives those who oppose them a simple choice, according to the report: “Leave or die.”

“They arrive in a village, assemble everyone at the mosque and say what they are going to do,” a witness told report investigators. “They give the village a week to follow their orders. Those who do not want to may leave. But those who do not comply are executed. They killed three men in my village who were collaborating with the authorities. And they did the same in many other villages in the area.”

The predominantly Fulani composition of FLM has led to intercommunal violence in central Mali that complicates an already dangerous landscape. FLM and JNIM each has recruited heavily among Fulani herdsmen. Now, much of the violence has an ethnic and cultural flavor that pits Fulanis against the Bambara and Dogon ethnic groups, both of which are composed mostly of farmers.

Since 2017, Bambara and Dogon militias — claiming anti-jihadist aims — have killed hundreds of Fulanis, including women and children, which has prompted retaliatory killings by Fulanis, according to a July 3, 2019, article in The Economist. The Malian army has been perceived to favor Dogon and Bambara people, which has intensified the conflict.

The complexities of central Mali’s security challenges can be traced back several years, if not longer. The northern rebellion in 2012 caused national authorities to direct their focus there, leaving the center of the country vulnerable to simmering ethnic tensions. Some Fulanis had joined groups such as Ansar al-Dine, and when they began to return home after the French intervened in 2013, the army followed and persecuted them, according to a June 2019 Al-Jazeera report. It was at this point that the formation of FLM began to appeal to Fulanis, who decried what they saw as government persecution and corruption. The Economist reported that government forces have joined Dogon and Bambara militias on patrols and given them special treatment at checkpoints, a move that further inflames tensions with Fulanis.

That disaffection fueled FLM’s attacks on military and government positions and its narrative of reestablishing Islamic rule in the fashion of the Macina Empire. However, Dogon and Bambara communities saw Fulani mobilization as a potential threat and began to prepare for their own protection, Al-Jazeera reported. In 2016, Dogon people formed the Dan Na Ambassagou, one of several ethnic Dogon militias, to combat the perceived threat from Fulanis, who responded in kind with their own militias.

It’s not clear how many of Mali’s 3 million Fulanis have joined FLM, Le Roux wrote. But it seems that the group’s appeal to Fulani ethnics has inflamed long-standing tensions between Fulani and Dogon communities.

Recently, those tensions have erupted into spectacular attacks that have destroyed villages and killed hundreds. On June 9, 2019, attackers struck Sobane Da, a Dogon village near Sanga town in the Mopti region, killing about 100 people — a third of the village’s population, according to the BBC.

“About 50 heavily armed men arrived on motorbikes and pickups,” survivor Amadou Togo told Agence France-Presse. “They first surrounded the village and then attacked — anyone who tried to escape was killed. No one was spared — women, children, elderly people.”

No group immediately claimed responsibility for the attack, but it came after a March 2019 incident in which armed men wearing traditional Dogon clothes killed more than 130 Fulani villagers in the same region, the BBC reported.

Since the rise of the FLM in 2015, the group has been accused of targeting Dogon — especially in retaliation for attacks on Fulanis, Le Roux wrote. The Fulanis probably have suffered the highest number of fatalities in the attacks.

In 2017, Mali initiated Operation Dambe to stop terrorism, restore military and government control, and help rebuild social and economic life. However, the FIDH reports that during Dambe, the military executed 67 people during six operations in six villages in 2018. The report called it a “caravan of death” that resulted in six mass graves. Some of those who were detained were tortured but not killed.

These actions resulted in Fulanis being stigmatized as terrorists, the loss of state legitimacy and the alienation of locals. “By multiplying abuses, FAMa [Malian Armed Forces] elements have also pushed many people to join the ranks of jihadists or community militias to ensure their defence and security,” the report states.

In addition to government counterterrorism efforts such as Operation Dambe and work by MINUSMA — the United Nations’ peacekeeping mission in Mali — and the G5 Sahel Joint Force, more will need to be done to restore peace to central Mali.

In late 2018, Mali launched a disarmament, demobilization and reintegration plan for groups in central Mali targeting young militants there. Le Roux wrote that Mali will have to increase oversight of how the military interacts with local populations. Allegations of abuse at the hands of security forces will have to be investigated fully and addressed publicly to restore public trust.

Providing security alone is not sufficient. Restoring public services and providing education for young people also must be prioritized. Finally, Le Roux wrote, officials will have to counter the FLM’s messaging through personal, radio and social media channels.

Researchers Rupesinghe and Bøås agree. It is “critical to restore trust between local communities and the state in central Mali: this means providing all vulnerable people with security guarantees and protection from attacks and ensuring transparent justice and accountability for victims. The strategy will also need to include longer-term measures, such as ensuring access to basic services, equitable justice, development and education. Conflict prevention must take centre stage.”